Most of the time I feel war memorials have little to do with the horror of war and have more to do with the expected viewership and even planning laws. The International Sailor in Derry is a great example of compromise for a modern era. A away from the centre of a divided city – unlike the first war memorial when built in the Diamond in Derry 1927 – but includes a double section plinth which has the obvious temptation of being steps for one who wishes to take a photo of oneself along with the handsomely chiselled sculpture. Are war memorials more of a middle class thing, and dying-in-war more for the working class? 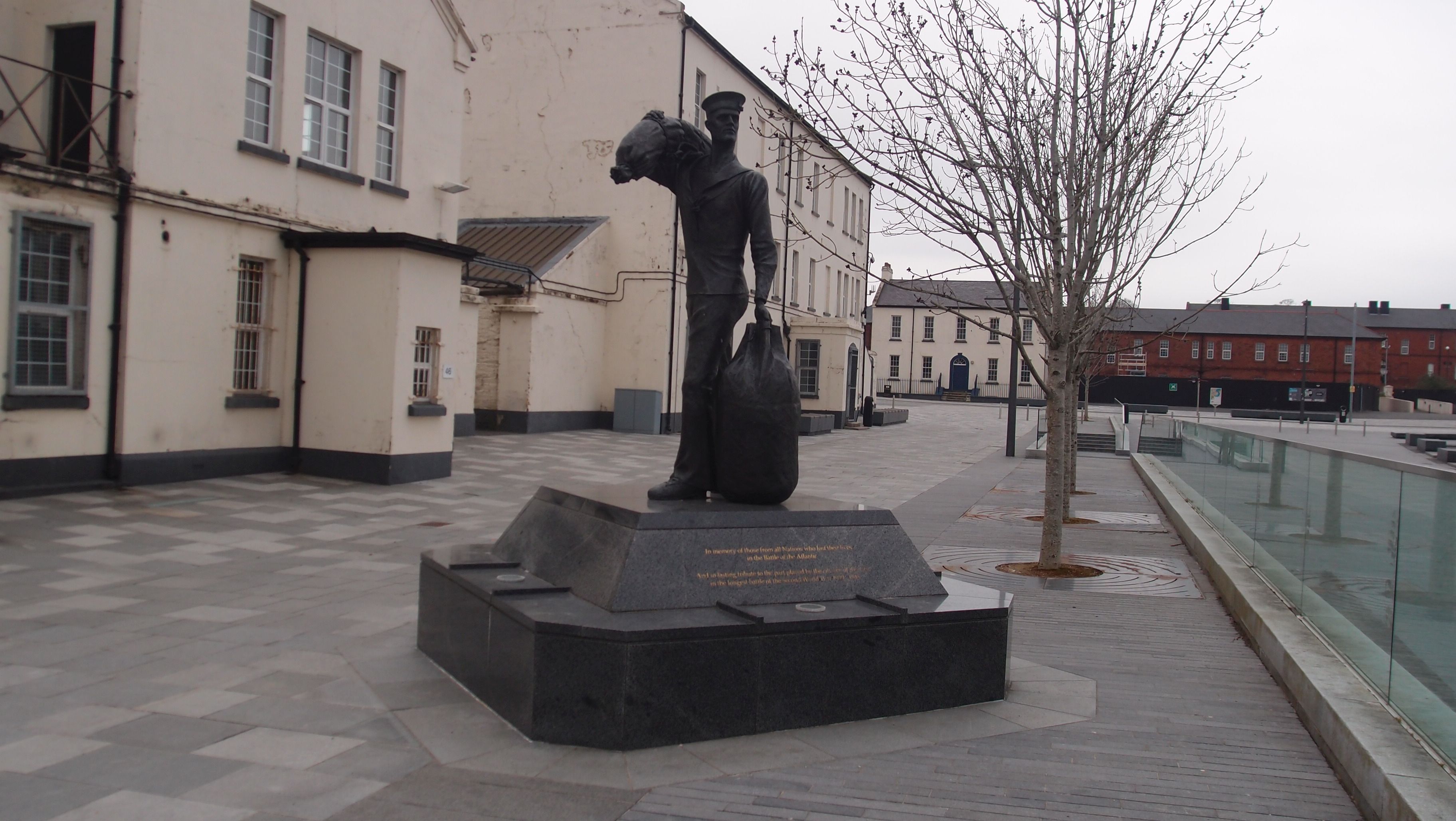 International Sailor Derry CityThe statue was created by the Canadian sculptor Peter Bustin. It was cast in the Tanat Foundry in Oswestry, Wales, and stands on a plinth of granite.  The sculpture itself is quite impressive – tall, dignified. How sad that so many men represented by this lively and vivacious figure should have lost their lives in the Atlantic.  What’s especially great is that the sailor is doing mundane, back breaking work, not firing torpedoes or looking into binoculars. He is instead the backbone, the average sailor.

But now seventy years since the war, things have changed. Derry once had a Protestant majority, and now it feels more like Galway or Limerick, as it become more and more subsumed by Donegal. Not only has Derry a 70% majority of Catholics it is also a tourist destination for many people from countries who were on the losing side of the war. Memorial’s must adapt with the expectations of the visitor, something I wrote about in relation to Cannes. The plinth is engraved with: “In memory of those from all Nations who lost their lives in the Battle of the Atlantic.” By focusing on combatants from all countries the memorial achieves something more global in a city with a outside reputation for being parochial.

Derry is a place where we see the celebration of history as a fluid matter. I note that though Derry celebrate the Walls of the City they do not have a July 12th event planned for 2020 though there is a St Patrick’s Day carnival.  For more than 100 years after the Siege of Derry there had been a ecumenical commemoration of the Siege, but in the 1800s it became more sectarian.

The cannons of the the defenders of Derry no longer point towards  James II and his troops but instead at the Bogside with its own mural memorials. Both the cannons and the memorials are very much part of the tourism in the city.

A memorial to World War 2 may arouse scant emotion, but the use of modern day emblems is close to the heart. When the Catholic Majority Derry City & Strabane District Council tried to ban Irish Flags from the St Patrick’s Day parade it ignited feelings of distrust from both communities. Many Catholics consider the tricolour to be their national flag, a position that Protestants might find threatening or offensive. Its not quite clear why this sailor memorial was needed other than to tick a box.  However having some relatively neutral memorials might be a good thing. Throughout Northern Ireland there are memorials which either community must  find challenging. Considering the background of where this statue now resides, Peter Bustin casts his everyman hero just about right. Here is a pleasant enough young man just getting on with his job.