On my last evening in Ballycastle, I made a desperate attempt to see Murlough Bay, Torr Head, and Fair Head – in that order.  The unexpected beauty of the first two had taken me by surprise, and delayed my arrival at Fair Head car park.  By then, the fading April light was quite dim, and in a hurry I missed a sign saying “Private Property” 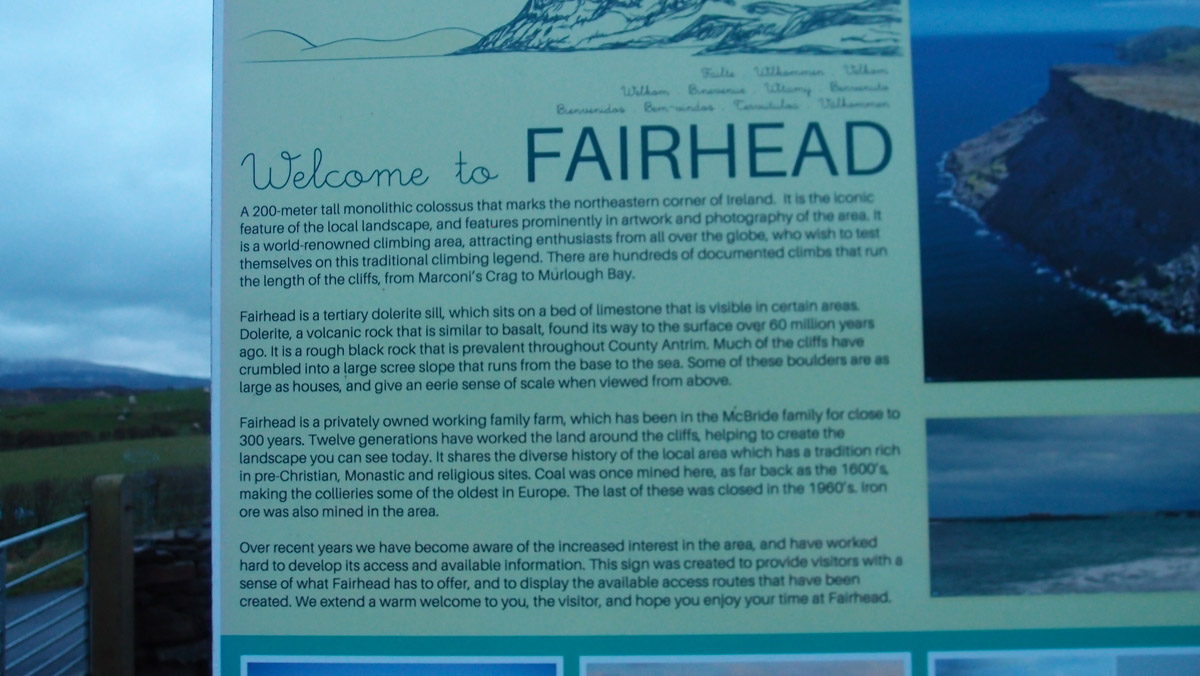 For this reason I do not have any proper photographs of Fair Head. I seen only the crown of a cliff which is famous for climbing and abseiling. I also have to admit not having done any research, so I did not even realise what was behind the darkening hill.

I walked past some sheep (and the sign that I had missed) and met a disgruntled farmer. In the end he was okay – I sympathised with him as someone who had grown up on a farm. He had been robbed in recent times and it was hard to know who to trust. There is another farmer close-by who is a big supporter of climbers and allows people to camp; he even allows his sheds be used for pre-climb lectures

All of the land at Fair Head is private farmland, and not owned by the National Trust in the UK.  So in this situation farmers are left taking all the risk of what could happen to people who are involved in an exciting but also a risky pursuit. In Northern Ireland under more relaxed hikers law (compared to the Republic), people like me have opportunities to walk on land which might not otherwise be available.  The essential thing is that there must be negotiations, transparency, and open communications between landowners and other stakeholders.

Here is an incredible photo from www.ukclimbing.com of what I was unable to see from the grassy blind-side of the cliff:

It seems that there are many types of climbs on Fair Head with various level of skill required to ascend. One is called Fired Earth (E5 6b)

An amazing single pitch of technical and sustained wall climbing, reasonably well protected, with a stunning thin crack to follow

Head or Benmore (Irish: An Bhinn Mhór; The Great Cliff) is a 5 kilometre mountain cliff. It is possible that Fair Head may be recorded in Ptolemy’s Geography (2nd century AD), being described as a point called Robogdion which may refer to Fair Head. The headland of Fair Head rises 196 metres above the sea.

The cliffs are composed of dolerite, giving a mixture of steep cracked walls, corners, and, in many places, sets of columns reminiscent of organ-pipes. The dolerite sits on top of a bed of chalk which is visible in places. Dolerite is a dark, medium-grained igneous rock, typically with ophitic texture, containing plagioclase, pyroxene, and olivine. It typically occurs in dykes and sills.

Here is some more dolerite from Anne Burgess at Geograph.ie 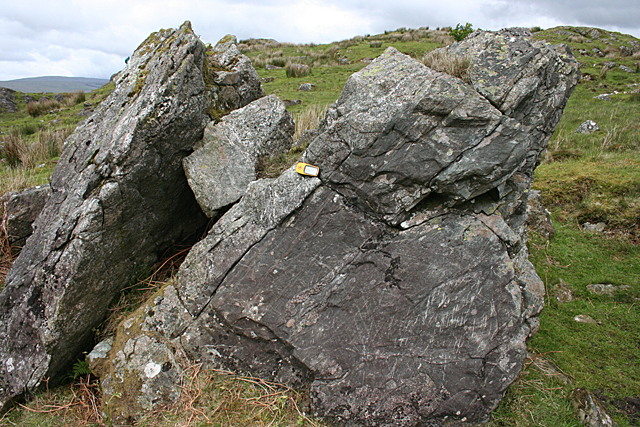 The dolerite of Fair Head comes from volcanic activity some 60 million years ago. The upper half of the cliff is formed of gigantic columns which are up to 12 metres in diameter, some of which are separated from the rest of the cliff but still stand.

A sill, also called sheet, is a flat intrusion of igneous rock that forms between preexisting layers of rock. Sills occur in parallel to the bedding of the other rocks that enclose them, and, though they may have vertical to horizontal orientations, nearly horizontal sills are the most common. The Fair Head sill is around 85m thick at maximum and consists of columnar jointed olivine dolerite, intruded into Carboniferous sediments in the north of the outcrop, with the base of the sill transgressing steeply through Carboniferous, Triassic and finally Cretaceous rocks to the south in the cliffs above Murlough Bay.

Along with the Fair Head sill are a number of smaller intrusions including the Binnagapple Sill which is just beneath the base of the Fair Head Sill on the coast north of Fall Point.

The Fair Head sill is a large scale intrusion showing transgression and internal modification of crystallisation products, with clearly exposed boundaries showing thermal metamorphism on variable scales. A marine transgression is a geologic event during which sea level rises relative to the land and the shoreline moves toward higher ground, resulting in flooding.  Transgressions can be caused either by the land sinking or the ocean basins filling with water. It is an important demonstration of the relationship between land-form and the underlying geology with the formation of the most prominent headland in north Antrim.

There are some wonderful Ireland-focused blogs. Perhaps we need an official directory of high-standard personal blogs