It is long accepted in Dublin that Bull Island did not exist until the building of the North Bull Wall – which was built in an effort to reduce the silt ending up in Dublin Port and as a result this silt was diverted elsewhere to North Bull. In 1871 the island was estimated at around 2km long, and now in 2020 it is about 5km long and 1km wide.

However, according to a recent book about North Bull Island “The Island Imagined by the Sea” there was already growing landmass. In 1686 a Captain Greenville Collins reported that the North Bull was a “hard Sand dry at low water.” We can see on the satellite photo shown here, that the North Bull Island is really the most stubborn part of a wider landmass, much of which is submerged.  By 1800 there was a small permanently located dry patch in this area – enough for it to be called Sand Island by 1819 – the mapmaker Francis Giles later called it “The Green” or “Bull Island”.  (The North Bull Wall was built between 1819 and 1824). 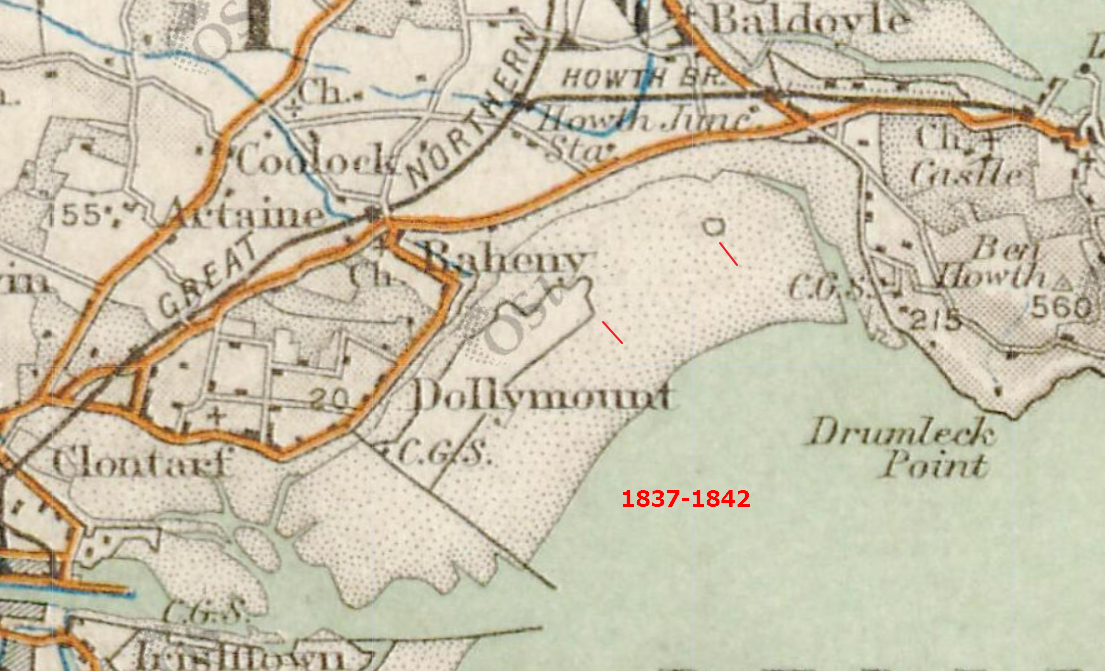 Rather than it being the other way around, where the Bull Wall created the island, it was instead built in order to prevent the sand of this nascent Island from clogging the bay. So the growth of the Island was actually impeded by the building of the wall.

The North Bull Wall did create a sandbar – near the mouth of the Liffey  – it was called “the mumbles”  and it had to be removed by dredging.

Instead it has been theorised (but not proven) that the North Bull sandbars might have been created by the building of the South Wall. The building of this wall was somewhat experimental and not all consequences (despite rigorous planning) could have been imagined.

Several maps show that North Bull was originally more than one island – and only the westward island was part of Clontarf Parish, and the other islands part of Raheny Parish – and as far as I know the island is still divided between the two Parishes.  According to McNally the last of these islands was called Green Island and it existed between 1862 and was gone by 1902

In Griffith’s Valuation (1847 and 1864) the area of North Bull Island consisted of 100 acres of sandbank which was in fees to the Vernon family who owned much of Glontarf. A strip of ten acres was in fee to the Dublin Ballast Board on the most eastern part of the islands. A further six acres was in fee to the Earl of Howth who owned much of Raheny.  In 1868 the Clontarf section had 230 acres, and the Raheny side had 144 acres (by 1914 this Raheny section had grown to 355 acres).

Lord Ardilaun of the Guinness family owned St Anne’s Park across from the islands. He had leased the two acres which were directly opposite from his estate. In July of 1984 he bought the remainder of the eastern section for £2000 – this covered the area where the Naniken river entered the sea until Kilbarrack Cottage, across the island and sea shore to the Martello Tower at Sutton, and finishing at the headland at Howth.