Monuments need to be reconsidered in order to see them in a fresh way.  But as we have seen from other articles here, they are very much part of their time, and often related to tourism. The Spire was installed in Dublin in 2003, and was hated by more people than it was loved. Now sixteen years later, many Dubliners will walk past without noticing it – yes, even though it is 120 metres high.  This summer I wanted to take some photos so I could rediscover the essence of what is the Spire.

O’Connell Street had declined over many years, and as part of an improvement scheme Dublin Corporation wanted to make a dramatic statement with something very modern – like an Eiffel Tower for Dublin. They also wanted to move on from the ghost of Nelson’s Pillar which stood in the same location from 1809 until it was blown up in 1966 – my father was close-by at a dance which was just breaking up. Dublin is certainly not Cannes so building a monument to celebrate a British hero was always going to antagonise people. Though a statue of Nelson in Cannes probably might have succeeded.  In 1916 there was a failed attempt to blow up Nelson’s Pillar.  Oddly there was a legal impediment to try to remove it the normal way  – there was a trust created at the Pillar’s beginnings, the terms of this agreement gave the trustees a duty in perpetuity to keep the monument standing. This was essentially a private monument in a public space. 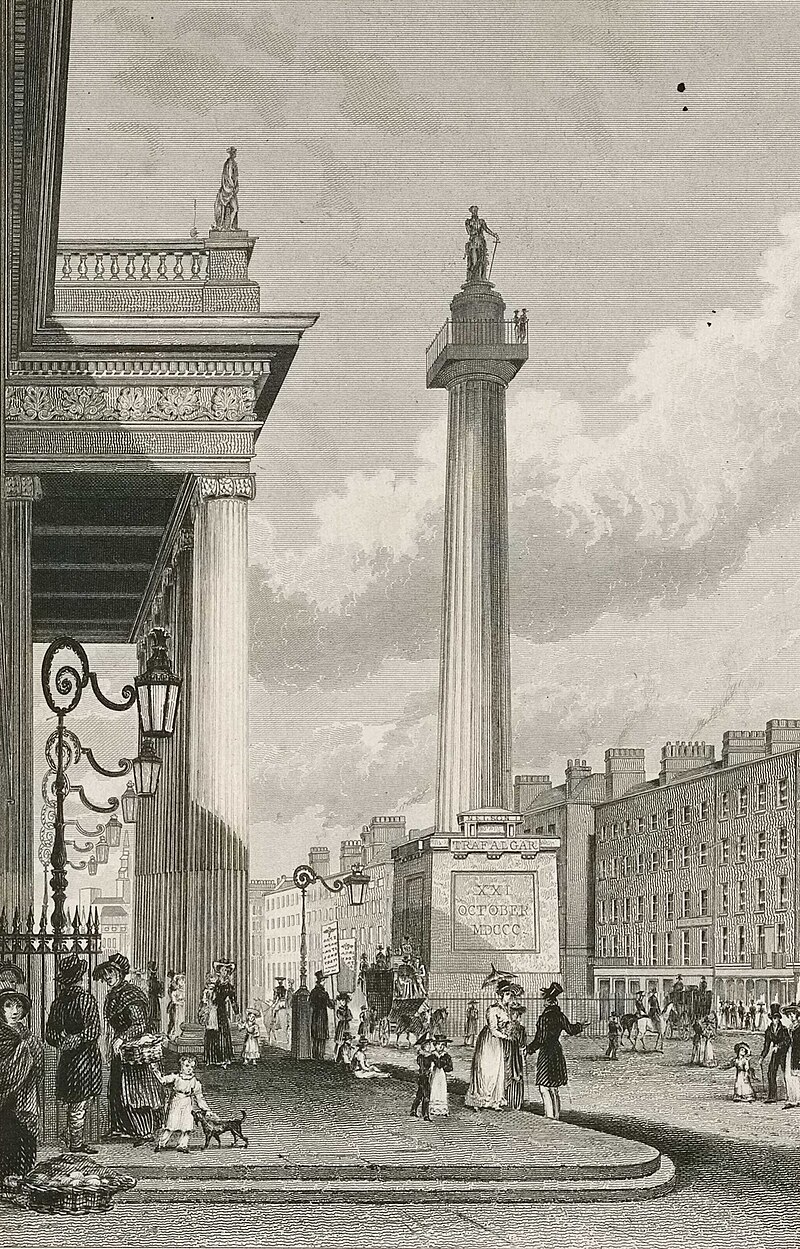 Nelson’s Pillar wasn’t just about remembering Nelson. It also became a popular tourist attraction. Kennedy writes that “for the next 157 years its ascent was a must on every visitor’s list”. It was only thirty years later that London had its own Nelson’s Column in Trafalgar Square – it was taller and more costly to build – but it did not have an internal staircase with a viewing platform, and as a result did not have the capacity to raise its own income.  At the bottom of Nelson’s Pillar in Dublin there was an entrance where people could pay a small fee to ascend for the view.

In 1853, the City planned to remove the Pillar in time for the Great Industrial Exhibition but when investigated it was learned that Dublin Corporation would need an Act of Parliament to make this happen.   In 1876 Peter McSwiney a former Lord Mayor suggested replacing the “unsightly structure” with a memorial to the recently deceased Sir John Gray, who had done much to provide Dublin with a clean water supply.  This monument was built instead three years  later (1879) on a location nearby on O’Connell Street.

Tim Healy MP suggested that all the statues, including Daniel O’Connell, John Gray, and Father Mathew should be removed:

if it is desired to commemorate the memory of the dead, the statues ought to be placed somewhere where they will not be in the way of the living

In 1882 the Moore Street Market and Dublin City Improvement Act was passed by the Westminster parliament, giving the Corporation authority to move the Pillar, but had a timetable that they could not meet. A similar attempt, with the same result, was made in 1891. In the 20th century, the Irish Builder and Engineer magazine asked for its removal. The poet William Butler Yeats also wanted it removed but not destroyed:

But if another suitable site can be found Nelson’s Pillar should not be broken up. It represents the feeling of Protestant Ireland for a man who helped to break the power of Napoleon. The life and work of the people who built it are part of our tradition. I think we should accept the whole part of this nation and not pick and choose. However it is not a beautiful object.

On the other side, there were supporters even from unlikely sources such as the nationalist Irish Press which argued for Nelson to remain untouched in 1955:

We believe that Horatio Nelson’s Pillar is his castle; and he is a true Dublin citizen by squatter’s rights, by a century and a half’s public repentance for widely publicised human frailty, [and] by his unique contribution to the symmetry of the main street of our capital city.

Taoiseach Sean Lemass suggested in 1959 that Nelson be replaced by a statue of Saint Patrick in time for the Patrician Year, 1961 – but the idea died away mostly due to discussions about costs.

But in the end it came down with a bang.

In 1969 the Irish parliament passed the Nelson Pillar Act, which ended Trust and and gave ownership of the site to Dublin Corporation.  Senator Owen Sheehy-Skeffington argued that the Pillar had been capable of repair and should have been re-assembled and rebuilt. Just as with Cannes and the debate over Edward VII there can be a strong desire to replace that which is now missing. The violent removal of such a large structure, of which many people had a fondness, must have created a strong yearning to find an emotionally satisfying replacement. Whereas in Cannes, a much smaller Edward VII replacement probably represented the winds of cultural change, there was no point arguing for a new memorial to Nelson elsewhere in the city. Some heroes bring extra baggage such as with the memorial for Roger Casement.

The Spire must be one of the most photographed structures in Dublin, and also as a substantial landmark represents an easy place to meet – especially as it stands at the junctions of two extremely busy walkways. The photos I have taken show views from two of the other memorials mentioned here – those of Sir John Gray and Fr Mathew. For any tall monument such as the Spire or Nelson’s Pillar, what you actually see is often dominated by the sky.  When you look up – there is a lot of sky but not a lot of Spire. I discovered that even though the Spire is a substantial edifice, there is something almost hidden about it. The large element of it disappears quickly into a vanishing point.

My camera discovered an endless number of birds that I did not experience with my eyes. We mostly experience the base, and the space around it, and also the sense of this longness than we cannot actually see.

Nelson was an international celebrity of his time – he brought a bit of swash buckle to the centre of Dublin. Fr Mathew and Sir John Gray were worthy men, but neither are for the age of the camera – and its possible that they were never particularly popular.   The Spire instead is an abstract thing where people come to meet, or take photos for Instagram. I think many modern landmarks are built with photos in mind, but tall ones are actually less suitable for this age. Built in 2003, the Spire was almost something of a different age already. Something dramatic for one to see, but less dramatic for the digital age. Using a camera, it is difficult to grasp its wholeness, something akin to trying to taking a touristic photo of the Empire State Building and the likes.

A further distance away from the Spire, the statues of Jim Larkin with his outstretched hands, and Daniel O’Connell with many elements lower down – actually provide for a much more satisfying photo. But Fr Mathew and Sir John are quite bland for this age unlike the recent memorial of Luke Kelly designed for a different age.