An evening at this beach brought an end to a week of driving on the north cast of Ireland.  The Silver Strand at night is a beautiful and mysterious place to be all alone. I had not prepared myself for an encounter with some other kind.

The shoe-shape structure of the bay, lends to a high level of seclusion. The exit only hints at the arrival of the monstrous ocean that is the Atlantic. The roar of the lion is just outside the door, and yet it is not available. Chaos and peace meet each other at this fragile opening.

The bay can only be accessed by a steeply sloping series of steps. The headland on the Western side of the Bay presents the remains of fortifications beyond which Rathlinn O’Birne Island is just visible. The headland to the south east rises, parallel with the coastline to the top of Sliabh Liag Mountain (6km) creating exceptional views from the Discovery Point.

I repeat. There is no way to enter except by the following undulating and sharply descending steps: 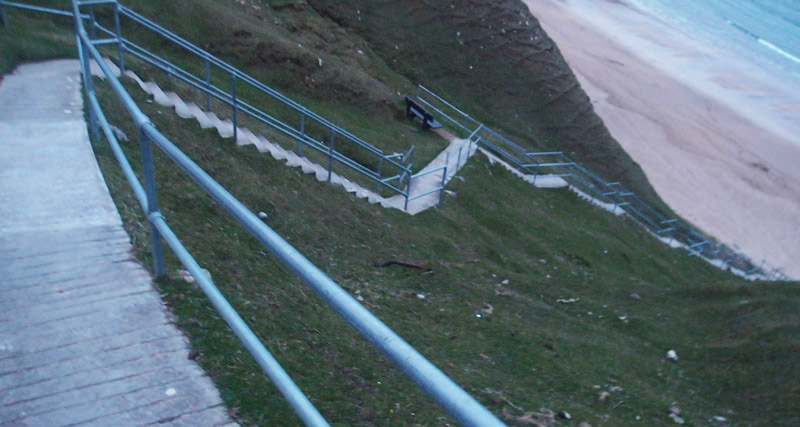 So unless you climb down the sheer cliffs or arrive by sea, there is no other way to arrive.  A group of young men were playing on the shore, and after they left, I was all alone. A dark blue light suffused the entire bay. It is quite small and easy to see all of it at once. This was pure solitude, a step down into the real wild. The tide was coming closer and soon I would need to leave. I was alone and even though I was safe from any malevolent human, I was unsure of the natural tendencies of the bay. Could this bay, surrounded by huge cliffs be engorged by an enormous tide?

I got a sense that something moved in the dim light. I was certain that this was some kind of an illusion. It was absolutely impossible that there was another person on the beach. Though the bay was dark, the stair case was still quite visible and no one could have ascended without I having noticed them. And yet there seemed to be something moving and not only moving but moving towards me. All I could see were variations in light moving towards me, and then I was sure it must be a dog even though that made no sense, and then finally when it was only metres away I understood. The photo below is a good indication of how I experienced this creature. 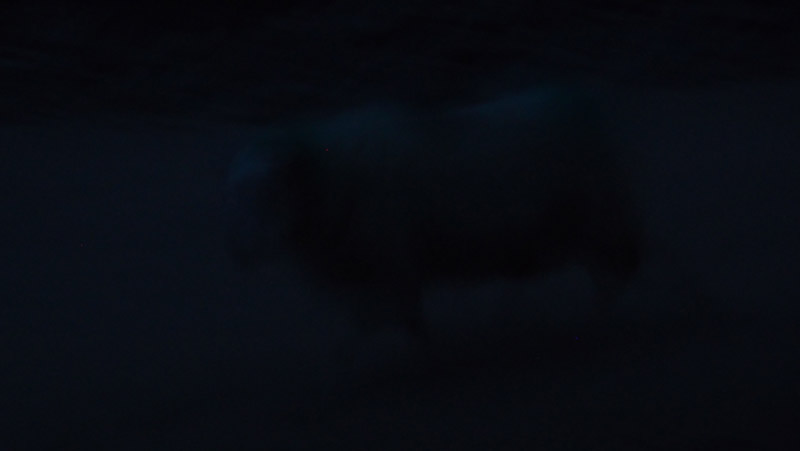 A fun mystery book to read is Haruki Murakami’s the Wild Sheep Chase – and this almost shocking moment triggered thoughts of what it would be like to leave her and return to my normal life. I had just spent a week exploring nature, meeting friends, and visiting prehistoric sites. What was going to happen next? What had I learned from all of this?

I’d made it back to the land of the living. No matter how boring or mediocre a world it might be, this was it.
― Haruki Murakami, A Wild Sheep Chase

Just as Haruki Murakami characters seemed compelled to go on adventures, so do the rest of us. We need to break our habit, see the world and understand it better, and bring it back to our unavoidable realities.