The coastal road of Antrim was sublime and beautiful even though I arrived late to the area. With few cars, it brought me a constant murmur of delight; it had that perfect road-trip vibe.

As the dusk set-in, and I still had to reach my hotel in Ballycastle, I only managed to take a few photos with my not so expensive camera.

One of which was what turned out to be the Red Arch at Waterfoot. This was built in 1817 by Francis Turnley who used the route when travelling between his estates at Cushendall and Drumnasole. Before the Red Arch and road were constructed a narrow steep road had to be navigated between the estates. The arch and the surrounding area of Red Bay gets its name from the red sandstone cliffs at the north side of the bay. 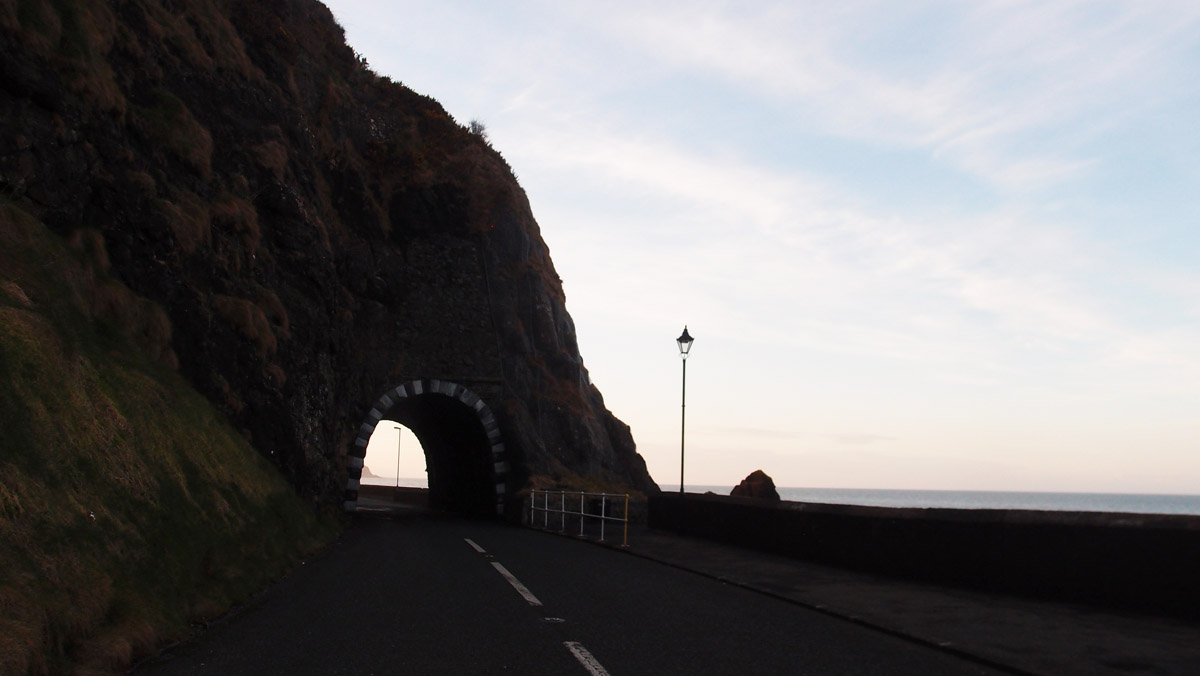 But why would anyone build such an arch? Is it a support for the hill to prevent landslides? Or is it some sort of folly?  Anything is possible and there is an interesting aside to the story which would have been exotic at the time. The tower in the centre of Cushendall was built by the same Francis Turnley in 1817, to confine riotous prisoners. Francis Turnley it seems, was landlord of the village, and was born at Richmond Lodge, Co. Down in 1765. His father was also Francis and his mother Catherine Black, a member of a wealthy family. His father obtained a position for him in the East India Company and he went to China in 1796 where he amassed a fortune of £70,000. On his return he bought two estates, one of which included the village of Cushendall. So paying for the folly was well within his pocket money limits.

I also wonder were these Turnleys andy relation to John Turnley, the Protestant from a Unionist background, ex-British Army soldier and also married to a Japanese woman, who was later shot by loyalist UDA gunmen because he made the extremely dangerous decision to lead a pro-Nationalist Party called the Independence Party – which sought freedom from Britain by constitutional means. (https://en.wikipedia.org/wiki/John_Turnley). He was killed in Carnlough which is close to Waterfoot. The streak of risk and adventure seems to often run in families – so they may be connected.

Arthur Butcher at Trek Earth has taken a much better photo of the Red Arch:

The Polar Bear of Ballygalley

As you are coming into Ballygalley, on the other side of Carnlough, there is a curious painted face, and also a loop at the end of a pole. Of course the obsessive photographer just cannot help himself. So I stopped to snap the smiley face, and take a photo via a ring for anchoring a boat. Were it not for the writer of http://apassionforcards.blogspot.com I would never have later figured out the location of the ring and the mysterious but happy face below.

So with a small bit more research, I discovered that this smiley face is called the Polar Bear of Ballygalley. And each year the locals give the bear a fresh coat of white paint.

The Drumlins and Vikings of Strangford Lough

Where is the Sea? The curious case of sea-blindness

“The British Isles depend on the sea, but we who live here can suffer from sea-blindness,

The Drumlins and Vikings of Strangford Lough

Though Strangford Lough is a long way from Scandinavia, it has an impressive Viking heritage. The

The low-profile straits – The Sea of Moyle

There is a Sea, next to Ireland that I never heard of –  What a surprise!