Discovering the Grianan of Aileach was a shock. Why had this impressive and beautiful structure failed to knock on the door of my general knowledge? There it curved in front of me, so extraordinarily well preserved. What a mystery! Yet a small amount of research later revealed some of the reasons why this site has not been wholeheartedly promoted by history experts.

In the 1860’s Dr Walter Bernard, a Derry doctor who lived in Buncrana became concerned about the dilapidated state of the this fort. In 1878, Dr. Bernard project managed and paid for the reconstruction of the site. This restored fort is over 23 metres in diameter with 360 degree views across Lough Swilly, Lough Foyle and the countryside of the Inishowen Peninsula. At 3.9 metres thick and 5 metres tall, the dry stone walls of the “Stone Palace of the Sun” have three interior walkways which are easily reached by several inset stairways.

Therefore the fort is mostly formed from the creative mind of this very determined Dr Bernard. He is a guy who got things done. Ireland has a lot of ruins, and there is probably no harm seeing some of them as they might have looked. Newgrange is the most famous example of such a big restoration, though in this case it was carried out by experts who specialised in the archaeology of the relevent period. 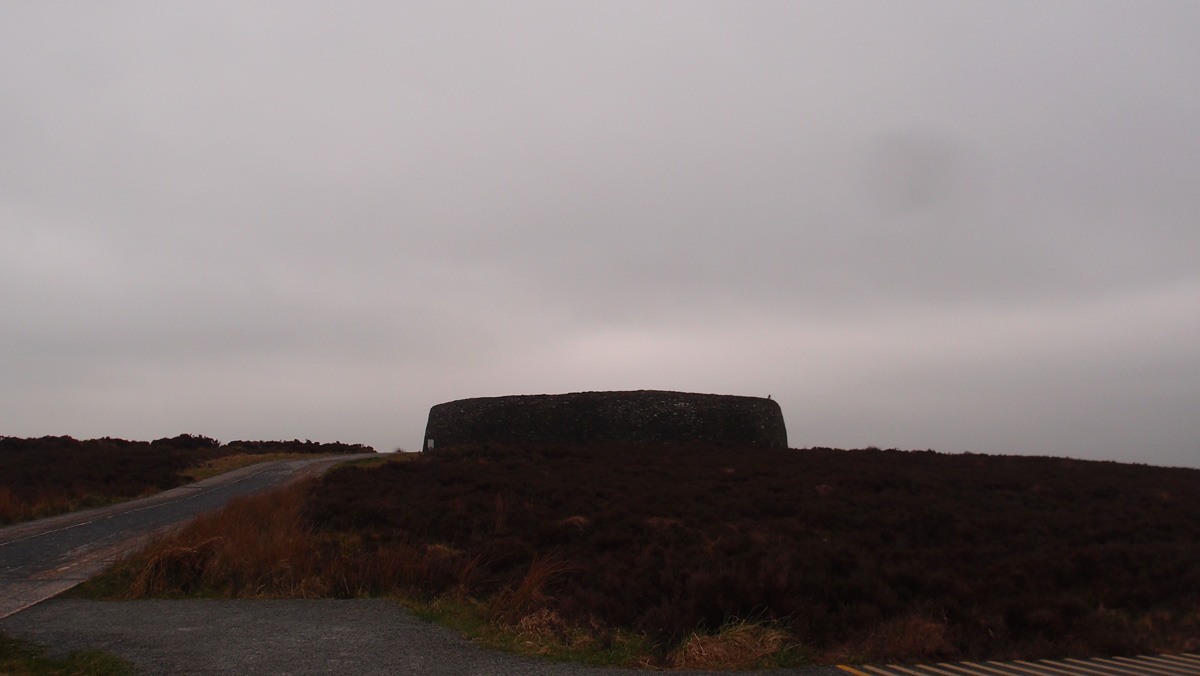 The fort is originally believed to have been built in the 1st century, on the site of an early Iron Age (c 500 BC) hillfort.  Some writers in the nineteenth century suggested that one of the two sites marked as Regia (or royal place) on Ptolemy’s map of Ireland, may be identified with the Grianán.

Is it possible that the Romans knew something of this fort? The same Romans were knocking up impressive urban water systems and building towns throughout Europe. It is not impossible to imagine that they had some knowledge of the geography of Ireland. When my father was young, in the 1940s and 1950s, people walked long distances and surely some Irish of this period would have encountered Romans.

The main structure is a stone ring-fort, thought to have been built by the Northern Uí Néill, in the sixth or seventh century  although there is evidence that the site had been in use before the fort was built. It has been identified as the seat of the Kingdom of Ailech and one of the royal sites of Gaelic Ireland.  Inside it has three terraces, which are linked by steps, and two long passages within it. Originally, there would have been buildings inside the ring-fort. Just outside of it are the remains of a well.

By the 12th century, the Kingdom of Ailech had become embattled and lost a fair amount of territory to the invading Normans. According to Irish literature, the ring-fort was mostly destroyed by Muirchertach Ui Briain, King of Munster, in 1101.

George Petrie first surveyed the Grianán of Aileach in the 1830s and suggested that, in the fashion of other monuments of this type such as Emania, the whole hill may have been enclosed by many other ramparts. There is no physical or historical evidence for this.  Petrie’s plan of the site shows a line of stones leading up to the entrance. These are now gone. 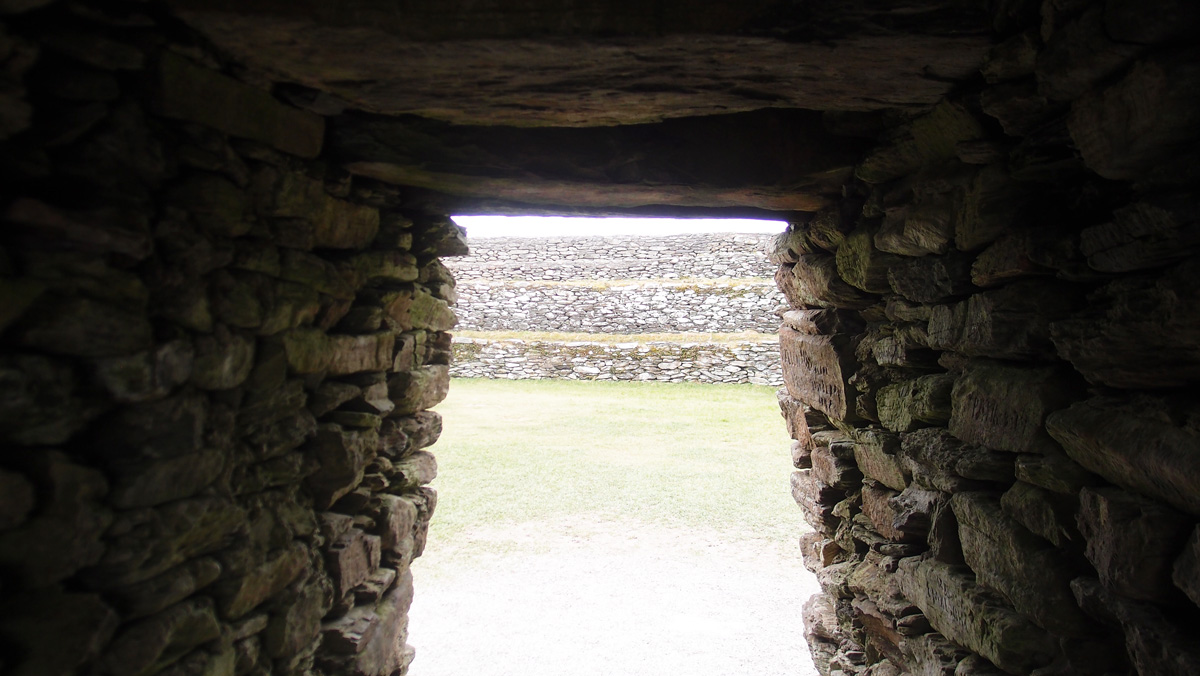 Bernard discovered many animal bones including sheep, cattle, goats and birds. He found stone items including “sling-stones”, “warrior’s clubs” and a “sugar-loaf-shaped stone with a well-cut base”. The most interesting stone object was “a slab of sandstone, chequered into thirty-six squares”, which Lacy believed to be some kind of gaming board.

Based on the morphology of hill-forts, Raftery estimates that there are forty hill-forts in Ireland. However, Lacy suggests that there are fifty forts remaining in Ireland. Multivallate hillforts are suggested to be confined to the West and South of the country; univallate forts are to be found in the north and east. The Grianán of Aileach is seen as an exception to this pattern. Multivallate are surrounded by two or more ramparts forming multiple lines of defence. Univallate has a single circuit of ramparts for enclosure and defence. 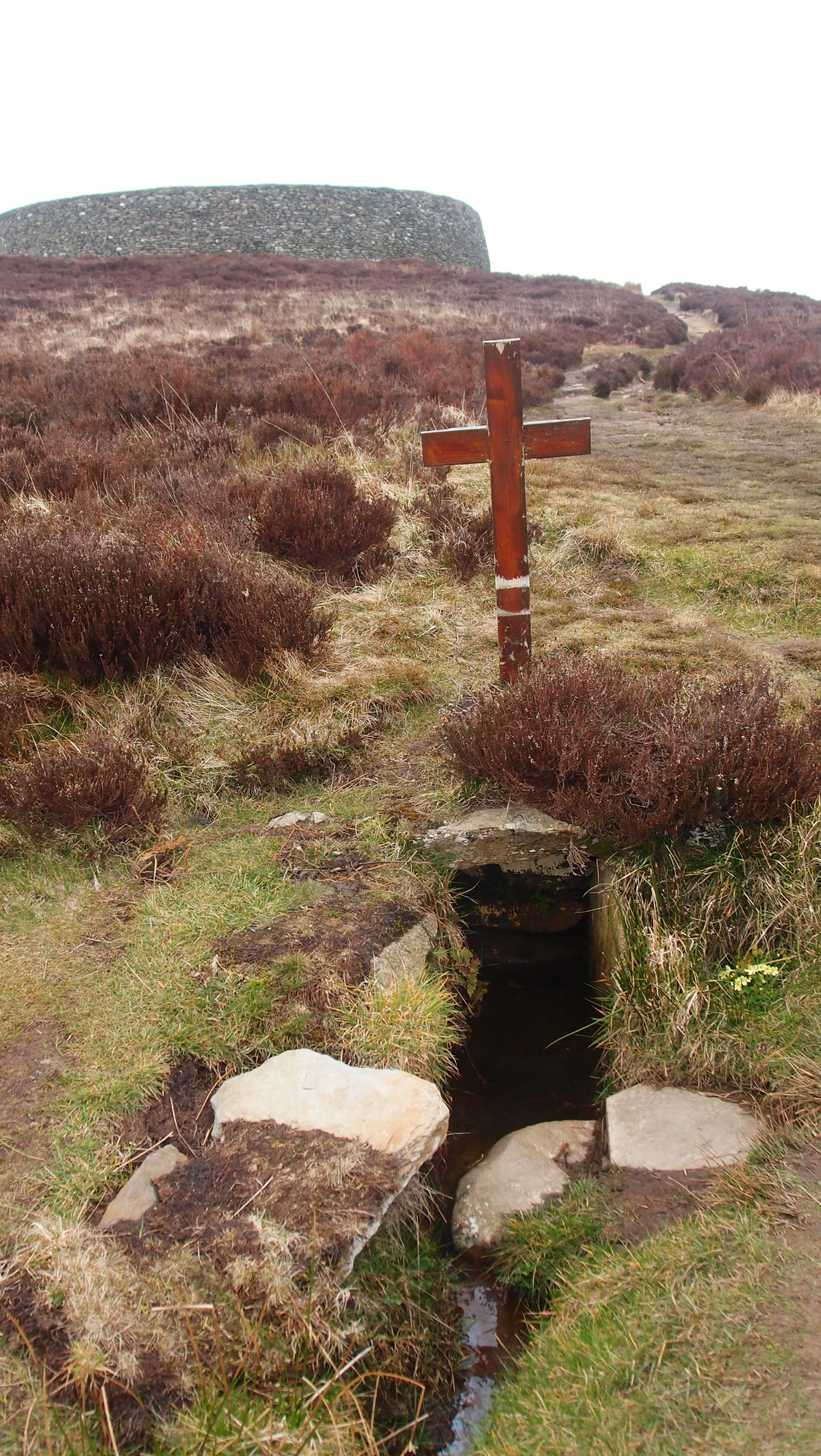 Well at Grianan of Aileach, Donegal

Between the two outer banks on the south side of the hill, is the formerly covered spring well which is dedicated to St. Patrick. It is written in the Tripartite Life of St. Patrick that Patrick blessed the fortress and left a symbolic flagstone there prophesying that many kings and clerics would come from the place. This flagstone can no longer be found at the fortress. It is believed that a preserved flagstone at Belmont House School in Derry, called St. Columb’s Stone, is the inauguration stone.

Donegal is an area of low ringfort concentration. It is therefore odd to find a hill-fort of the size and scope of Aileach in this area. The ring-fort density of Northwest Ulster as a whole is 0.16 per square kilometre. Ring-forts are virtually absent from the areas of Derryveagh, the Blue Stacks, Slieve League and Inishowen.  The word Aileach has a long history in Ireland and Scotland. Both Petrie and Lacy suggest that it comes from an adjective derived from old Irish “Ail”, which means a rock, stone or boulder. Lacy believed that Aileach therefore means either stony or stone place. Lacy suggests the etymology of the word might derive from “Ali Theach” meaning stone house.

The word Grianán means sunny place. It seems that the early Irish considered it to be a place with a view.  An earlier theory was that the word meant “temple of the sun”. This theory has no evidence.  One might guess from all of this that it means “The Stone Palace of the Sunny View” but again this is just a guess.

Grianán of Aileach was probably an  important site, perhaps the power centre of Northwest Donegal while the ecclesiastical settlement at Derry was the religious centre. Aileach’s political and strategic importance was such that the annals report that it was attacked at least three times during its existence. In 674, Fínsnechta Fledach, King of Ireland, destroyed the fort. Perhaps, this was the earlier hill-fort that stood on the site before the current larger fort was built. In 937, during the reign of Muirchertach mac Néill, Viking raiders demolished the site. Vikings had settled at Lough Swilly and Lough Foyle during this period. In 1006, Brian Boru, marched though the territory of the Cenel Conail and the Cenel Eogain and probably came to Aileach. In 1101, another king of Munster, Muirchertach Ua Briain, came to Inishowen where he proceeded to plunder and ravage the region.

Without a written history, it can be difficult to explain our own histories, let alone something which happened more than one thousand years ago. We are dependent on the painstaking work of archaeologists and others to piece together the jigsaw. With Grianan of Aileach this is even more complex with its multiple periods of settlement let alone the restoration work done by Dr Bernard and others including the OPW in later years. If those stones could tell stories, some of them might tell us that they travelled there in the late 1800’s. But how important is it that every site should be left as found? Is there not a case for  occasional restoration? Is there an unnecessary nostalgia for leaving things as they lie? And besides when the restoration has been complete who would demand that Grianan of Aileach or Newgrange should be returned to ruins?

The Grianán of Aileach