Annesley Bridge is further away from the sea than when it was first built in 1797.  There was a time you could stand on the bridge, and easily see Clontarf Island only a few hundreds metres away. But now Clontarf Island is no longer visible, because it is not there at all!

The bridge crosses the River Tolka – and creates another connection between the city and Fairview. It is named after Richard Annesley, 6th Earl of Anglesey. The first bridge was demolished and rebuilt in 1925.

The East Wall Road, North Strand Road and Poplar Row meet at the west end of the bridge with Annesley Bridge Road at the east end. This is a very busy junction for anyone used to driving or cycling towards the city centre in the morning. The decorative elements of the bridge – with its wonderful railings and lampshades – point to an elegant vision by the designers. Beneath the bridge is an un-dredged section of the Tolka which can give the area a decrepit atmosphere – it is the kind of place you expect to see shopping trolleys, but in reality it is a substantially more appealing bridge than Luke Kelly Bridge (Ballybough Bridge) a small bit further upstream.

In 1792 an act of parliament was passed that permitted the trustees for the Howth Road to erect a new bridge over the River Tolka in order to provide a more direct route to Howth and Malahide. This required the construction of a new causeway on each side of the Rive Tolka to carry the road to the bridge. These two causeways are now represented by the section of North Strand Road to the north of Annesley Place and, on the northern side, by Annesley Bridge Road. I have marked the map below (from Google Maps) with yellow in the area that was presumably reclaimed to build the causeway.  On the third map on this page you will see Fairview Strand, where the boutique and pharmacy are located on the first map, and in 2019 this section of street is clearly no longer a strand! 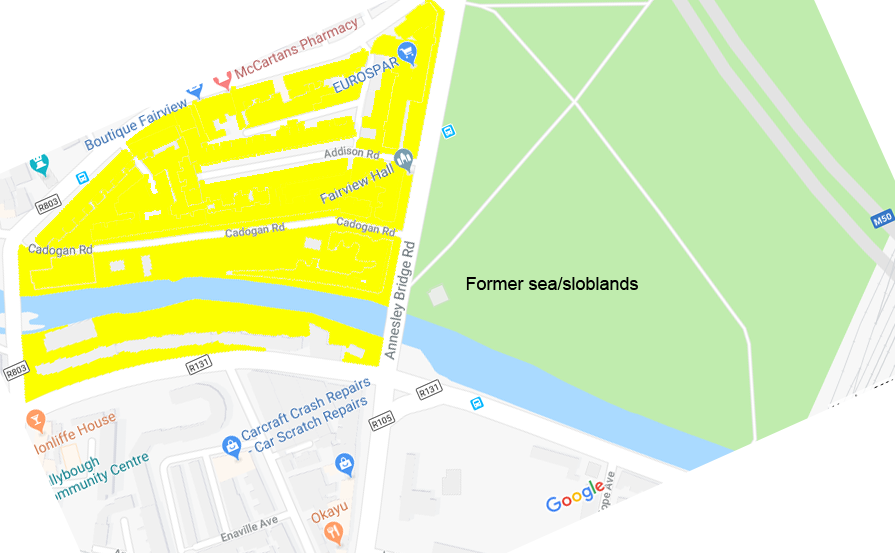 It seems that Luke Kelly Bridge, just to the left in the image, was the last bridge on the Tolka before Annesley was built. I haven’t been able to find a construction date for the original Luke Kelly Bridge and the current bridge looks much more modern than Annesley.

The map above is from 1798. To me it is still unclear why there was the need for such a bypass, when the Ballybough connection seems sufficient for the traffic of that time. On the other side of Annesley Bridge there would have been the sea where the tide was probably mostly out – certainly a muddy area. Anything to do with boats and Dublin Bay immediately triggers the need to explain some sort of engineering project. And it is here that we see the polder nature of the this small area. Fairview Park and Clontarf Dart station, and all of the East Wall were reclaimed from this muddy section of the sea.

The map above from the late 1800’s shows the railway line to the right of the image.  This line originally would have crossed over the slob lands – on the map there is nothing on either side of the rail except for this formative sea.

On the final Google Maps version of 2019, we see the Dublin Port Tunnel running beneath Fairview Park. This former Kingdom of Mud, now a place for both slow and fast activities. 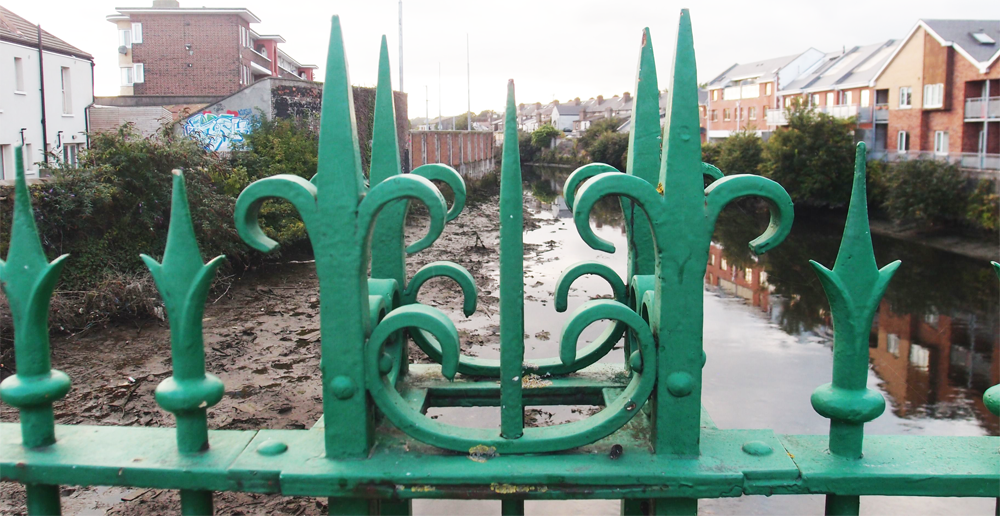 The railings have at least some style. I wonder have they always been this colour?  I also presume there were previously lamps standing on each of the bases. The muddy banks are not so attractive, and this stretch of water leads up to Luke Kelly Bridge and an area that was called Mud Island in the middle of the Tolka, where the river would have once met the sea.  According to James Wren there was a guy called John Dalton who wrote in 1838 of seeing some ancient villas with pointed roofs at Ballybough Bridge. In the 17th and 18th centuries there were mud cabins on the city side of Ballybough Bridge in this area they called Mud Island. After the Plantation of Ulster in 1606 the McDonnell brothers were dispossessed after the Plantation of Ulster in 1606 and one of them settled on Mud Island and became its monarch!

There is a silver trowel in the Dublin Civic Museum which came from the opening ceremony. Due to the volume of cars this bridge was replaced in 1925 by the current bridge built on concrete piles.

In 1797 Annesley Bridge was the final frontier of the Tolka. Now there is a pedestrian connection bridge between the East Wall and Fairview Park, and also Alfie Byrne Road bridge and the East Point Causeway bridge.

Annesley Bridge is no longer a bridge at the sea.