I have made two quick visits to Chester. It is such a lovely city. Chester Rows, the Roman Walls, the Amphitheatre, Grosvenor Park, and the Canal Basins (and apparently there is even a Zoo!). But there was one thing that I could not find…… the Port! For hundreds of years before the prominence of Liverpool, Chester was the primary port on the north-west coast of England. And yet when I asked several local people for directions, they all said something like this: “I have lived all my life here, I should know the answer to that, but I’m not sure.” It was only after I returned home and did some research did I learn that this was more complex question than I had imagined.

Chester as a port existed in three stages. Roman times, Medieval, and also in its final stage during the canalisation of Britain. Chester and Ireland have a closer relationship than many in Ireland or Chester might have imagined.

By medieval times, Chester was an important destination for those coming from Norman Ireland. For example here is an excerpt form the travel journal of Symon Semeonis (Simon FitzSimon) a monk from Ireland:

We reached the city of Chester, which is in England, on Holy Thursday [24 March 1323]. Ships from Ireland arrive continuously at this port. Here we celebrated Easter [27 March]

This connection with Chester was commemorated in Dublin by the installation in 1178 of the church of St Werburgh. I had not known that St Werburgh was the patron saint of Chester, and also that the saint was not a man – which I had simply assumed.

Robert O’Byrne writes about both the saint and the Church in his excellent blog.

However Chester had a naval existence hundreds of years before Ireland even had monks. On the banks of the River Dee there is an area that was formerly a harbour in Roman times, and at the city wall Roman boats were able to moor. The stony remains of the Roman harbour wall remain near the racecourse. Here the war ships and trading ships of the Roman empire were unloaded.

On the map of Roman Chester below its easy to envisage that section of the city at the bend of the Dee, of the current day city – see the second map below.

Here is a map from 2017 where we can see the bend in the River and also the Race course. We can see that the going would have been a bit heavy for any horses racing in Roman Times.

Large parts of the city including the current race course would have been covered with water during high tide.  At Chester Racecourse, on the following photo you can see the remains of the Roman harbour wall.

Here is evocative image where you can see boats travel around the racecourse in 1728. I have to say that the race course looks a bit shaky with regards to health and safety issues!

Chester had many advantages for the Romans. A spacious harbour at the highest navigable point on the Dee, a river crossing, and a position for a port that might be easily defended. Though the Romans had already been in Britain for at least thirty years, it was not until around 70 AD that they shifted to a policy of conquering all of Britain and apparently Ireland also. Despite such lofty ambitions, at the same time they were struggling to keep a hold of Anglesey with its prime location on the Irish Sea. Chester would have been a good secluded place for preparation for military advancement in many directions.

Deva was the Roman name for Chester and there was a Roman road that ran from there to Colchester called the Via Devana. And there is a reference on Ptolemy’s Map for Devana. 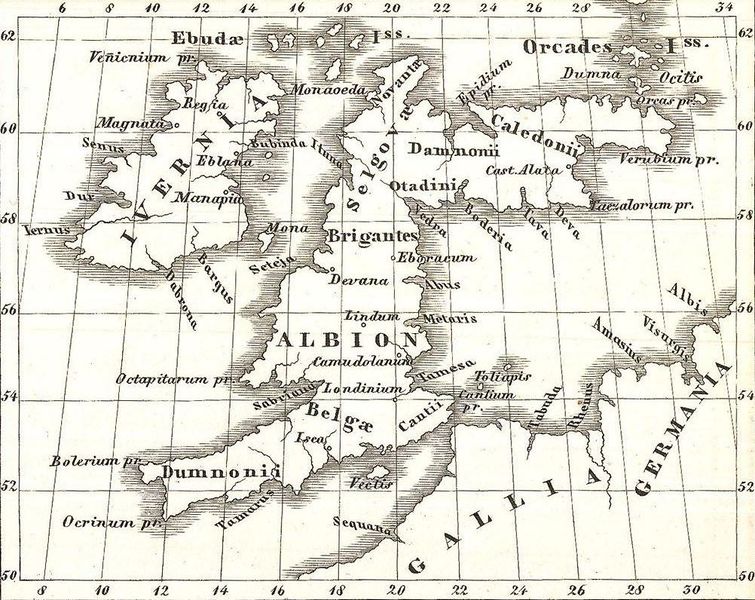 So there is a feeling among academics that the mere potentiality of an invasion into Ireland might have been a key reason that Chester developed into a naval harbour in the first place. Even when the Romans had abandoned Britain it is believed that the fortifications left behind might have been used to defend the locals from forays from the Irish Sea.  Yes those pesky Irish – but I’m sure we just wanted  sell some shoes.

Even though the Romans lived in Chester two thousand years ago, they were people just like us, and this strikes me with much force with the following inscription on a tomb:

To the divine shades of Flavius Lucius Callimorphus, who lived 42 years, and to Serapion, who lived 3 years and 6 months. Thesa caused this to be erected to her Brother and his Son.

Flavius is slightly younger than I, and his son is slightly older than my own son. I feel sadness for a man who lived in Chester in Roman times.

Having been a naval base in Roman times, the port continued to be used for trade and transport. But in the 14th century, silting of the Dee estuary started to badly impact on the depth of water available to shipping. It was decided to extend the defences further out into the river, and as a result, in 1322 the Watertower was built.

16th and 17th century maps of Chester show the River Dee approaching close to the Watergate, allowing just enough room for a quay so that goods could be be loaded and unloaded into waiting vessels or the carts

During Roman times, Hilbre Island was then part of a land that stretched over towards the Wirral on the Welsh coast.  Along here existed an extensive anchorage called the Hoyle Lake. At some stage the Hoyle Lake became silted up and this anchorage was no longer viable. You can see on the map below Hilbre Island and when you navigate from there towards Chester, the silting of the Dee is evident.

Chester tried desperately to keep the port functional by clearing and dredging the Dee, and using various ports along the headland of the river.  As late as 1600 the burghers of Liverpool complained to the Privy Council that they were still required to send their ships to Ireland via the Hilbre – showing that Chester was still more relevant than Liverpool. In 1600 there is a record of 64 vessels embarking with troops and supplies for use against the O’Neill rebellion.

By 1626 – according to Government records – Chester had 15 vessels, but Liverpool had 24 sailing out of the city. And the Chester boats were mostly sailing out of other ports in reality. So the end of the dominance of Chester was near.

Over succeeding centuries the river silted further, trade seriously declined and Chester lost its ancient position as the principal seaport of northern England and along that part of the Irish Sea – perhaps Bristol was more powerful?

But a renaissance came in the 1730s when the Dee was canalised, new quays and shipyards were established and New Crane Street was laid out to link the new wharves to the city.

Joseph Hemingway, writing in 1836, about Chester:

From the quays are exported some of the richest cargoes of that excellent commodity which affords to the taste of the Londoners the most grateful flavour, and presents the Cockney with what he calls “the fattest Velsh rabbits in the Vorld”- good old Cheshire Cheese.

With the continuing silting of the Dee and the rapid rise of the Port of Liverpool, the shipping industry dissipated (although steam coasters continued to visit Crane Wharf until the 1930s) and the area continued to decline, to the degree that if you walk around today, it is difficult to imagine to imagine much activity.

Chester is such a serene town to visit. It is difficult to visualise this as a busy shipping city or indeed a Roman Naval base.

The Old Shipgate Arch
This arch once spanned the medieval Shipgate in the City Walls – just to the west of the present Bridgegate and next to what is now Chester University. Outside the walls there were once quays for seagoing vessels and one time a ferry. It was moved from the City Wall and made a couple of stopovers before eventually ending up at its current location inside the lovely Grosvenor Park.

If one is to gain an education, by making a visit to other lands, one benefits greatly from some preemptive reading. However, it is only when one visits a place that you begin to understand what you need to read! On researching Chester, and physically searching for it’s port, I am happy to have found another person on a similar journey – see the blog here:
Where is Chester harbour?

I came across this former link between the canals and the Dee – it exists now only as a rundown symbol of the relationship between Chester and Ireland and the rest of the Roman Empire.

The Journey of Symon Semeonis from Ireland to the Holy Land: https://celt.ucc.ie/published/T300002-001/index.html

Another excellent source about the Romans in Chester: http://www.british-history.ac.uk/vch/ches/vol5/pt1/pp9-15

Where is Chester harbour: http://www.narrowboat-waiouru.co.uk/2016/01/where-is-chester-harbour.html

Ports in the Irish Sea

Islands in the Irish Sea