The Stacks at Downpatrick Head date back 350 million years are made of limestones and shales.

The thin dark layers are shale formed by mud deposits, the medium layers are sandstones, while the white thick layers are limestones and made of seashells. Dun Bristle, the sea stack off Downpatrick Head, is a good example of this feature. The high cliffs were formed by the drift of the American continent against Europe as well the similar cliffs at Slieve League in Donegal. 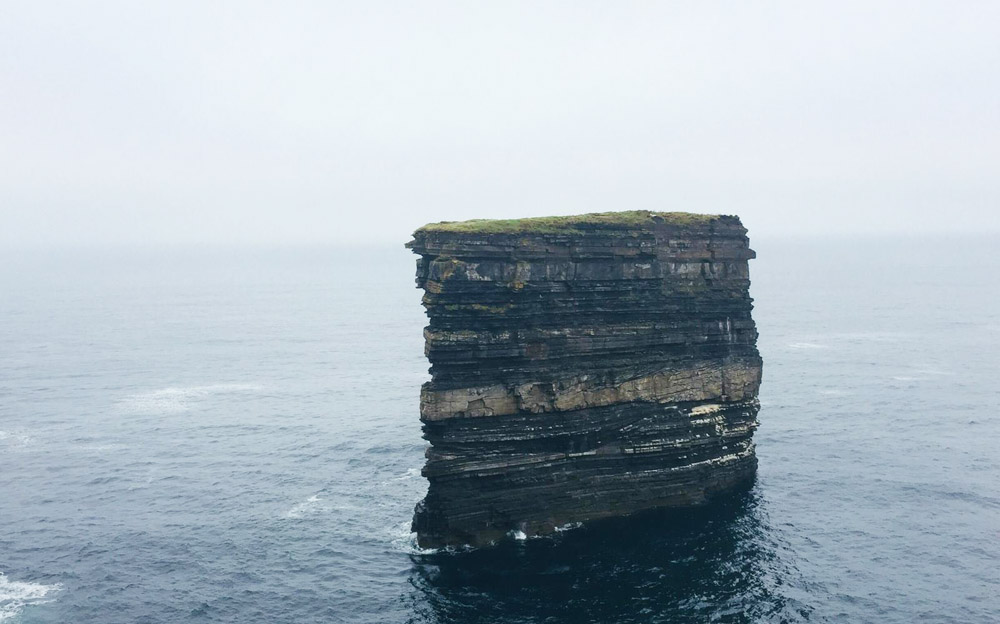 Dún Briste (Gaelic for Broken Fort) was once joined to the mainland. The sea stack stands 45 metres (150 feet) tall.  Dun Briste and the surrounding cliffs were formed around 350 million years ago (during the ‘Lower Carboniferous Period’), when sea temperatures were much higher and the coastline at a greater distance away. 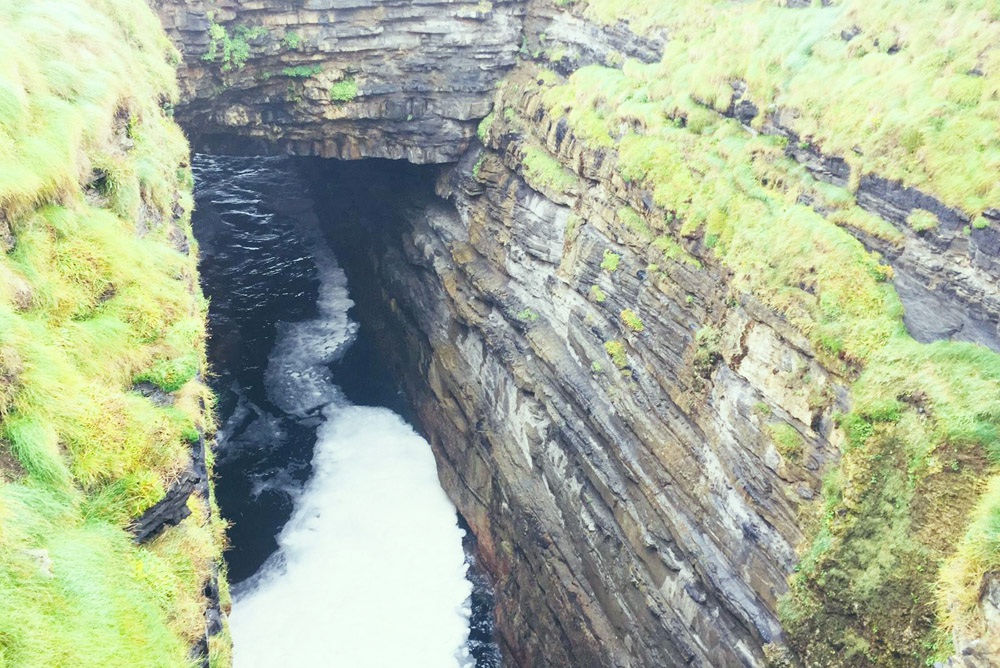 There are many legends describing how the Sea Stack was formed but it is widely accepted that an arch leading to the rock collapsed during very rough sea conditions in 1393. 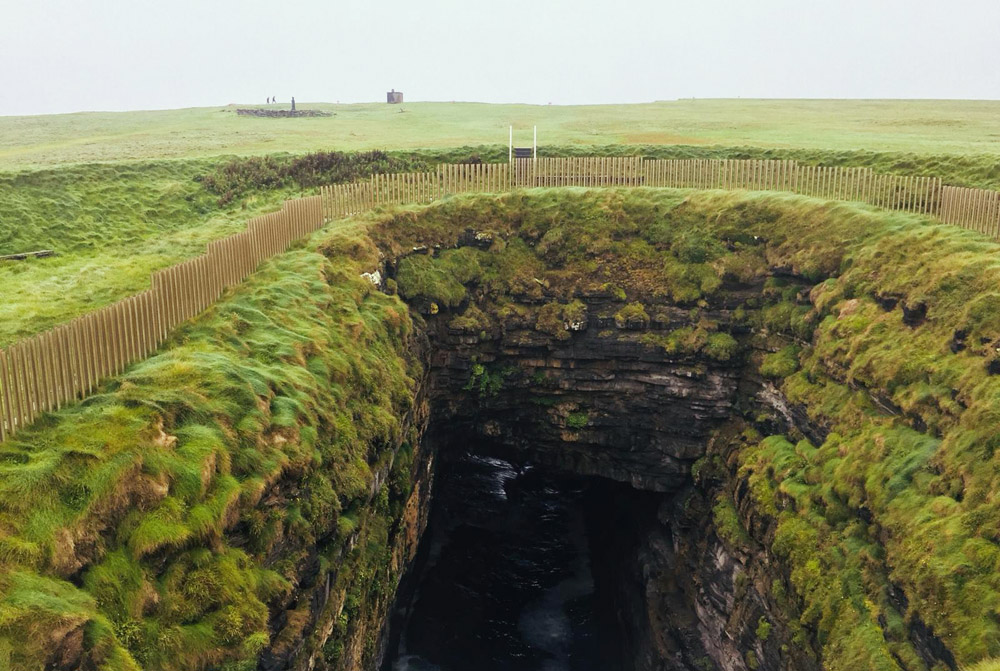 As the stack is safe from any land based predators, it is a safe haven for a vast array of bird species at nesting time. Occupied by Common and Greater Black Backed Gulls, Kittiwakes, Cormorants and Puffins.

In 980, Dr. Seamus Caulfield (of Ceide Fields fame), his father Patrick Caulfield and Martin Downes, Professor of Biology at Maynooth College, landed by helicopter on Dún Briste and discovered the ruins of two stone buildings and an interesting low opening which is supposed to allow sheep to pass from one field to another. 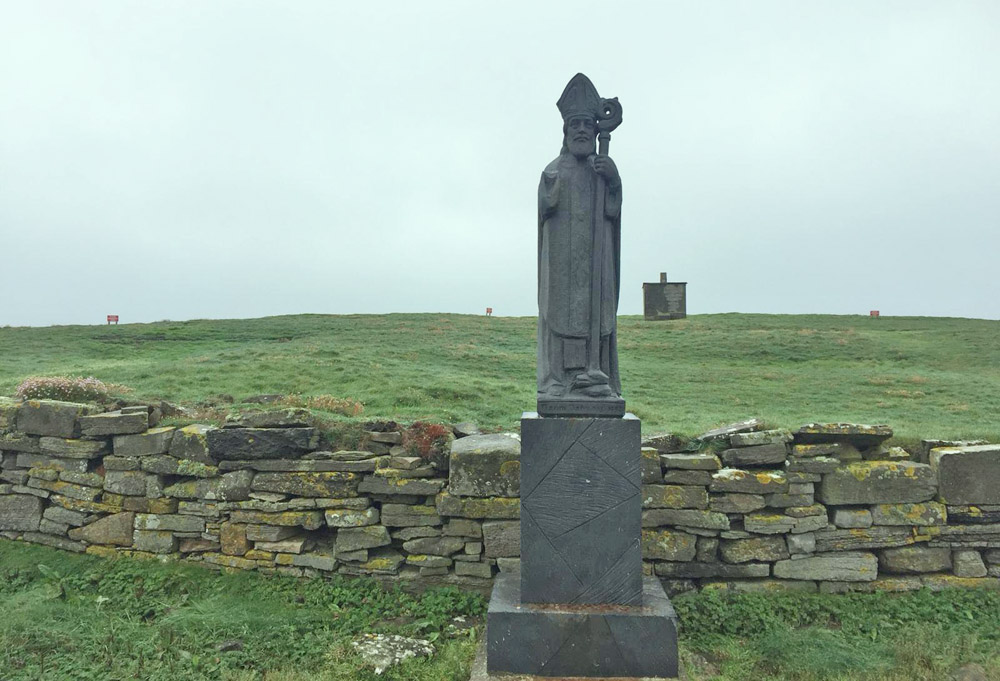 There are also a statue of Saint Patrick erected in the early 1980’s, which replaced a previous one erected in 1912. The statue is next to what is supposed to be a 5th century Church – though I can only find this one reference to it

Creature from the Blue Light – Silver Strand in Malin Beag