Murlough Bay is in County Antrim. It is a bay which is hardly known in the south of Ireland.  One can view Rathlin Island and views across the sea to the Mull of Kintyre, Islay, Jura and various other Scottish islands.

I’m almost reluctant to mention Murlough Bay. Though I have a good knowledge of most places in Ireland, I had never even heard of the bay until the day I visited. I missed the turn-off, and then as I drove around each bend, and began to descend, I started to worry. I had little experience of driving downwards at such a steep angle. I carefully moved forward, holding the reins of my car with the brakes forced down, and then I looked upwards, and the scene before me as the April evening edged closer. There was Murlough Bay. A place I hd never previously known. This is why I want to write but yet I do not want to write. About the beauty that grasped all my senses and said “feel the awe.”

I had not expected, on this trip northwards, to find something so pleasing. Something that I, despite the wide expanse of sea facing countryside, would experience all alone. That this should even existed, the ethereal Middle-Earth like atmosphere, the hundred shades of green and blue. This might seem odd, but I actually felt a sense of fear. It seemed too eerie, that I should have this extraordinary place all to myself. 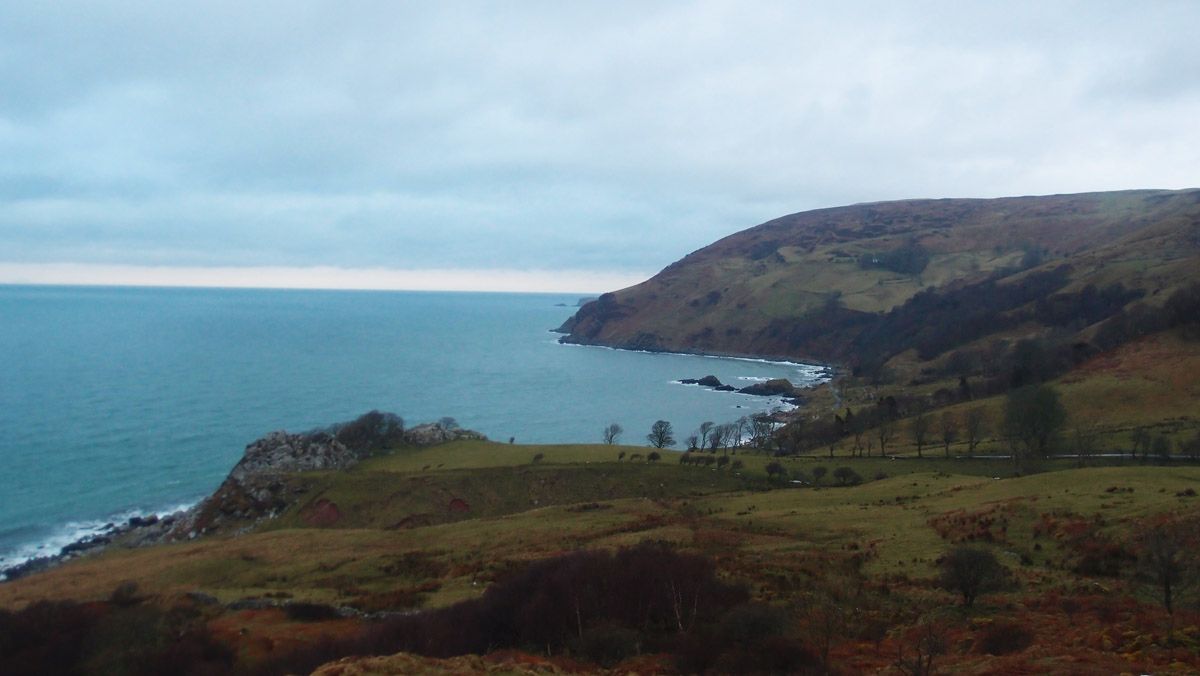 All of this beauty emerges from a very evolved geology which is mostly basalt overlaying sandstone and limestone. Some 500 million years ago, what we now know as Ireland existed as a number of discrete areas of land and sea floor within an ancient ocean called Iapetus. As plates drifted this ocean was closed.  These movements and eventual collisions created mudstones and sandstones into other rock types known as schists. These rocks, which are among the oldest in Northern Ireland, can be found today in Murlough Bay.

In the Bay you will find igneous, sedimentary and metamorphic rocks; the oldest rocks occur at the eastern side of the bay and are Dalradian schists, which are just over 600 million years old. Red sandstone dating from the Triassic Period overlies these schists, and the boundary between the two is an unconformity representing a gap of some 350 million years. A second unconformity, is seen where Cretaceous white limestone overlies the Triassic sandstones. A conglomerate (a rock composed of rounded pebbles of pre-existing rocks) is found at this unconformity and contains fossils which indicates that Jurassic rocks were here and later removed. Unconformities are gaps in the geologic record that may indicate episodes of crustal deformation, erosion, and sea level variations

Roger Casement had wished to be buried here. Elsewhere I write about the simple memorial to Roger Casement – which is not so simple either….