My first impression of Brighton’s famed shore was the dark spectre of what I later learned to be the old West Pier. It sits in the sea like a deserted oil rig, and, unbeknownst of its history I was surprised that such a bleak industrial structure would be allowed distract the views of visitors to the famous beach.

Deemed a public hazard, the burnt-out Concert Hall was removed in 2010. The skeletal remains of The Pavilion, however, were left to become a feature of Brighton’s seafront. Its desolate beauty makes it much discussed, wondered about and photographed. The Trust has no intention of removing the remains unless overwhelming safety issues arise.

This brings to mind elements of what I wrote about on Cannes. Memory and memorials are tightly woven. And when our favourite landmarks are destroyed, we feel a loss of harmony. But as an outsider, the West Pier is not a desolate beauty. It is ugly. You come to Brighton to get away from the reality of your own life. But the West Pier is overwrought with nostalgia for a time that cannot return. Resorts cannot survive without attracting new tourists; they must renew themselves with new landmarks which is one reason for the i360 observation tower. Just as the citizens of Cannes accepted that they did not wish to keep a dishevelled version of a Edward VII monument, Brighton is faced with the same emotional dilemma.

Also like Cannes, Brighton began as a location for usually wealthier people to get away from the disease and pollution of the cities. John Constable brought his wife Maria to Brighton to aid her during a time of poor health. He visited her regularly, and created the following painting in 1826–7 depicting an ancestor of the West Pier, the Chain Pier.

This was painted at a time when Brighton was developing quickly as a fashionable seaside resort. New hotels (which in the painting almost look like skyscrapers) look towards the sea, and the Chain Pier which had opened in 1823 survived until it was destroyed by a storm in 1896. This pier designed by Captain Samuel Brown, who had completed a previous Chain Pier in Edinburgh two years earlier. It was primarily built as a landing space for packet boats to France. His most famous bridge is the Union Suspension Bridge over the Tweed but one of his major works was the Kenmare Suspension Bridge built in 1840 but demolished in 1932. (Just to note that Archseek has an article about this bridge, the first suspension bridge in Ireland (see references below) but it does not mention Captain Brown.)

But Constable wasn’t the only painter in town. J M W Turner had a patron in the city, and he created a painting named Brighthelmston, Sussex (1824) which also depicts the new Chain Pier.

The two images depict a large town in transformation from a small fishing village to a place of refuge for the rich – including patron’s of the arts. It is still clearly a fishing village and Turner’s painting even carries its older name Brighthelmston which was obviously too much of a mouthful for the fast moving well-to-do.

Brighton became the busiest cross-channel port with several packets daily. However, the difficulty of landing in bad weather made Newhaven‘s sheltered port more attractive. After 1847, when the railway went to Newhaven, few ships sailed from Brighton.

At the base of each tower there were shops – essentially early resort souvenir shops. Wealthy visitors bought sweets, refreshments, jewellery, prints, books and polished stones from the beach.

The Chain Pier cohabited for three decades with the West Pier which was opened in 1866, and began to decline in comparison to the West Pier with its band and side-shows, and the Aquarium (1871).

The West Pier was designed by Eugenius Birch, who learned his trade by engineering railways in India. It opened in 1866 and closed in 1975.

It was designed to attract more tourism to Brighton and numbers peaked with 2 million visitors between 1918 and 1919.

The Brighton Palace Pier opened in 1899 and was designed and constructed by Richard St George Moore. It is the only one of the three famous Brighton piers still in operation today attracting four million visitors in 2016, and has featured in many works of British culture, including the gangster thriller Brighton Rock.

Richard St George Moore, who was born in Chester in 1858, a son of Charles Moore, a Dublin-born merchant living in Birkenhead, Lancashire, and his wife Charlotte, daughter of Richard St George, of Dublin. In Ireland he made surveys for the Dundalk Water Works (in partnership with C. G. Clarke) in the early 1880s, and rebuilt Ballinamona House, Co. Waterford, for Robert Thomas Carew in 1895, following a fire.

The area around the piers were heavily mined to prevent an invasion during World War One and Two. Part of the piers were removed to stop Germans from landing aircraft. After the war the mines had to be removed as we can see in the following photo from http://www.mybrightonandhove.org.uk

A cinema adaptation of Graham Greene’s novel Brighton Rock came out in December 1947 and starred Richard Attenborough and Carol Marsh who can be seen here relaxing along the shore.

Graham Greene had an interest in the darker side of life, and where better to find it but at a sea side resort. This perhaps also attracted him to Nice where he wrote a non-fiction work about corruption in the city – On the Riviera, A Morality Tale.  Today Brighton seems much too middle class to imagine a town full of criminal racketeering.

The movie was remade again in 2010 and in the following scene we can clearly make out the distinctive pebbles of Brighton Beach.

Though Brighton Beach is quite clean, I had not expected to find no sand. Now I understand that beaches depend on the type of rock available for erosion. The shoreline around Brighton is constructed from chalk. The pebbles on the beach come from flint deposited within this eroded chalk.

As chalk is soft, erosion is high, so the shore is being constantly filled with these larger pebbles. A harder substance would not erode so quickly and thus allow the sea more time to nibble away at the pebbles and create more familiar sand.

During my visit there was a celebration on shore of local photography suitably called Tides.

The photographs record the seafront as it constantly changes, the daily rhythms, the seasons, the weather, physical regeneration.

I wondered was the following image an emblem of Brighton or was it just a large salt and pepper canister?

Also on the shore was a sculpture called Afloat (1998) by Hamish Black. It has been been suggested as a means of imagining how the Universe might look. The sculpture was created by taking a world globe and pressing the south and north poles together to form a torus linking the sea and sky. Across its surface are the shapes of the major continents. As with some of the newer sculptures in Cannes, this is a monument designed for the age of Everyman having a camera. 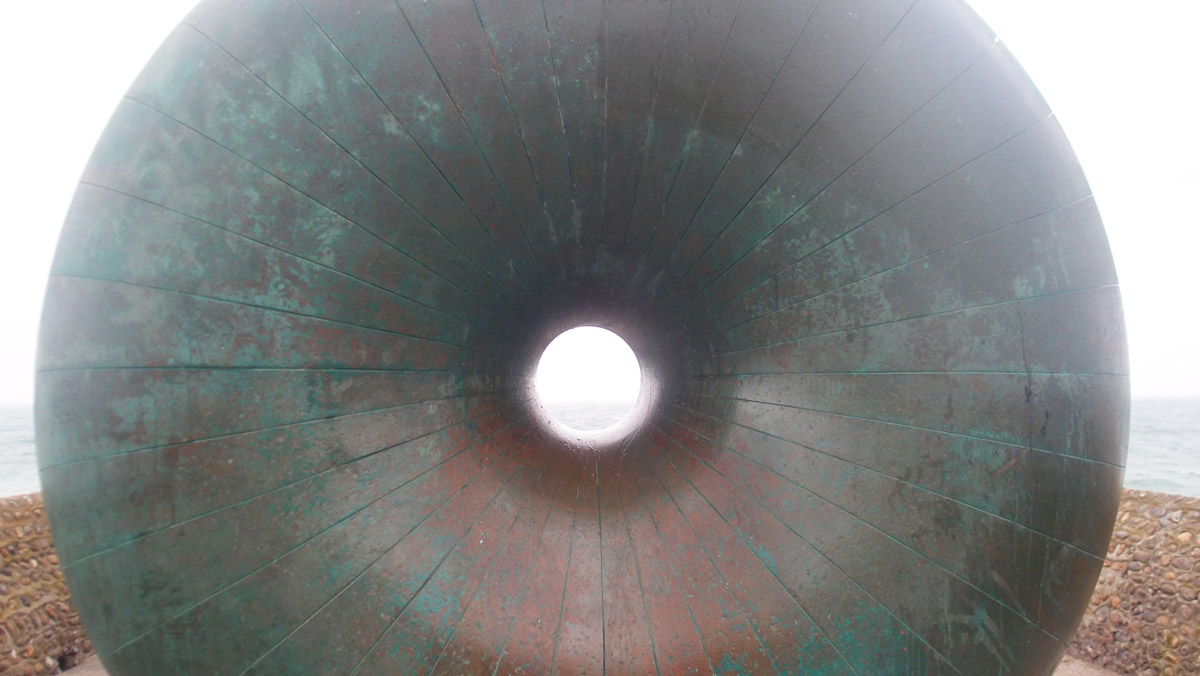 Brighton along with many other English seaside resorts are famous for an unusual genre of art – naughty postcards. Donald McGill (1875-1962) was the most famous shaper of this form.

In Ireland we imagine we were the only ones involved with censorship, but in the UK local censorship boards often banned these postcards. And this despite the cards being created so that the text and  image would not impact on a child.

McGill’s set alarm bells ringing in Morecambe, Torquay, Southend, Weymouth and even that supposed capital of naughtiness, Brighton. McGill never ran into any trouble in Eastbourne, however. Everything he drew was banned in Eastbourne.

In 1941, George Orwell, in his essay “The Art of Donald McGill” considered McGill’s postcards seriously from a literary and social point of view.  In 1954, under a government crackdown on declining morals, McGill was prosecuted and fined under the Obscene Publications Act 1857. This almost wiped out the industry.

Though it is a huge structure, the British Airways i360 does not dominate the shoreline.  It is 162 metres high (Dublin Spire is 120 metres) and allows people a slow gliding transfer upwards until you have a 360 degree view, and from which it is possible to see the Isle of Wight 79 km away. 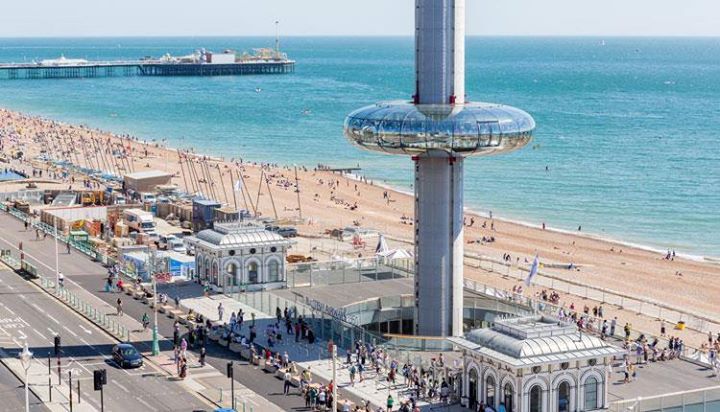 Though it was initially to be developed by a private funder, the financial crisis forced first the local council to get involved, and then the UK government had to offer a loan to the council of £36 million.

Throughout its history as a seaside resort, Brighton has understood the fundamental importance of adapting to the entertainment needs of the casual tourist. Resorts must have the means to suspend disbelief, to bring people away from thoughts of their normal world, and to hold them in the now. Brighton has has a legacy of massive engineering projects which have brought millions of visitors to the stony shoreline.

Why is Brighton Beach in the south of England covered in stones and not sand? – https://www.quora.com/Why-is-Brighton-Beach-in-the-south-of-England-covered-in-stones-and-not-sand

The Art of Donald McGill – https://en.wikipedia.org/wiki/The_Art_of_Donald_McGill