Like many other resorts, Ballycastle succeeds to remind people about war.  Whether you are in Carrickfergus or in Cannes, you must call attention to the World Wars.  This is a golden rule. No tourist may be permitted to mentally wander away from the girls in bikinis or sandcastles, when there are trenches and tanks to be considered.

We know already that the local government in Cannes were aware of the potency of well selected monuments to seal a certain image in the mind’s of those who might visit. But we also know that the needs and mindset of visitors has evolved over the past one hundred years.

In Ballycastle the memorial is located at the lower end of Quay Road near the River Moyle. The obelisk  is made from Cecilian marble, with a spire seven feet (2.1m) high on which is worked a wreath, and was unveiled originally by Mrs. Greer, widow of the late Senator T. M. Greer, Ballycastle. Until this discovery, the Northern Ireland Senate had slipped below my consciousness – it seems to have been a polite body that politely exited to yonderland:  https://en.wikipedia.org/wiki/Senate_of_Northern_Ireland

On the cap is the inscription: 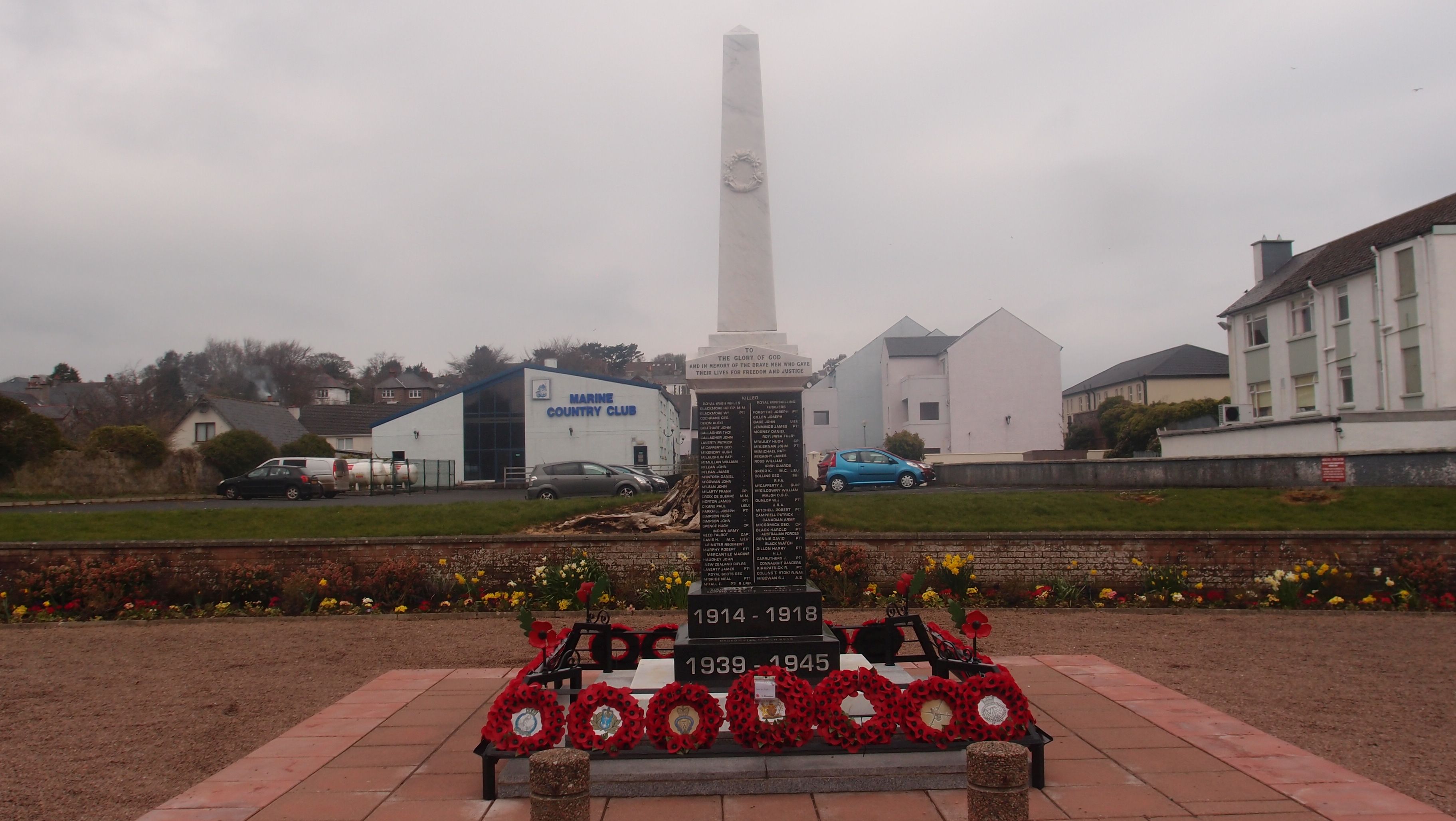 Ballycastle, like Cannes, was also faced with a Memorial repair conundrum, though there seems to have been no doubt as to how to proceed.  On the 29th March 2015, the memorial was rededicated after spending over £30,000 on restoring the memorial, adding additional names and researching the memorial. The restored memorial was unveiled by the local RBL in the presence of the Mayor of Moyle District Council. The memorial now includes all those that served as well as died in both World Wars (and not just WW1)The Restored Memorial is a combination of the original marble which was in a very poor state after almost one hundred year on location and has granite plinths and name panels.

In Ulster there are many memorials built for two reasons – marking your territory, building bridges across the community.  Though the wars might be identified with the British Army, the young men who died came from all backgrounds. Robert Thompson has thoroughly researched the background of all those who died – it is quite a meticulous (and I am thankful to the equally determined blogger Lennon Wylie for republishing here: http://www.lennonwylie.co.uk/RobertThompsonBallycastle.htm. I have chosen one casualty, as he died alongside one of my fellow Cavanmen.  Joseph Gillen was only 19 years old, though he looks much older with his moustache.  He is buried in France close to the Belgian border.  The ten dead show the all Ireland nature of the troops.

Another reminder of the war is the Shipwrecked Mariner’s Society mine along the shore – suited more to selfie fetishists than those who have a predilection for war.  Turn-up your saturation variables for a blast of red on white (except that my photo below is on the dull end of that goal!).

The mine is part of a series of similar mines throughout the UK. This organisation was founded in 1839 “to provide financial help to merchant seafarers, fishermen and their dependants who are in need”. One of the ways it raises money is the placing of old mines, as collecting boxes, in coastal towns.

You can read more about the Shipwrecked Mariners Society

Old mines offer not only an opportunity to collect some change, they also offer the opportunity to die! Yes these mines, unlike the soldiers of the same war, sometimes appear when unexpected – are they aware of the cessation of fighting?

In September 2017, according to the Belfast Telegraph, the PSNI and Coastguard personnel were called in to investigate after what appeared to be a naval mine washed up on a beach late yesterday afternoon. Army Ammunition Technical Officers were also summoned to the scene at Ballycastle, Co Antrim and carried out a controlled explosion. Apparently the entrance to the Foyle had been mined to protect British ships at port in Derry.

Ballycastle did not only have mines, it also had bombs as well. Interestingly both the IRA and Loyalist paramilitaries brought their violent ways to Ballycastle.

But Ballycastle isn’t just about war! It is a lovely calm place. The area around Ballycastle is famed for its geology, and no more so than the ultimate accumulation of a varied max of stone – the pebble beach. You can read more about it here – Geology of Ballycastle Ballycastle Beach is a popular tourist destination located on the Causeway Coast Route on the Antrim Coast of Northern Ireland. Ballycastle Beach is comprised of predominately sand with the beautifully coloured well weathered shingle as mentioned.

Ballycastle Beach is approximately 1.2 kilometres in length and runs from the pier at Ballycastle Marina at the western end to Pans Rock in the east, where there is a great view of Fair Head. You can also look out towards Rathlin Island.  This is such a lovely beach for a morning walk to clear ones mind. Pans Rock are named not in memory of a Greek God, but because there were salt pans here, used to extract sea salt. On a small rock there is also a mysterious face.

And it also has clean bathing water. You read signs like this all over the coasts of Ireland and the UK. You can read more about water-safety regulations.

There is not just the sea in Ballycastle. The Carey, Glenshesk and the Tow Rivers flow down from the glens into the Margy River. It then flows into the Moyle Sea at the start of the Strand

Towards the harbour, I came across this odd looking sign-post. Certain it was a piece of public art designed anchor – to pay homage to the thousands of boats which have landed here for millennia. But I was very wrong about that!

If you wish to find out more about this sign, then you need to read here. I have to warn you though – you might be on the start of a mysterious, and long (yes very long) journey……

Ballycastle is not lacking in Public Art and there are two obvious examples. The first are a set of fish and swans. And then a collection of useful mosaics. In 2011, Moyle District Council commissioned two new pieces of public sculpture at Ballycastle Harbour and Ballycastle Seafront. Malcolm Robertson designed and made both sculptures. The project was part-funded by the Northern Ireland Tourist Board’s Tourism Development Scheme and by The Arts Council of Northern Ireland’s Public Art Programme. The Northern Ireland Tourist Board contributed £50,000 to the sculptures as part of a wider promotion of tourism in the area.

Public art is increasingly playing an important role in the regeneration and re-imaging of our towns and cities. These two new sculptures unveiled today in Ballycastle will provide local residents and visitors with artwork that is free and accessible to all, creating a real sense of place and identity.

Unfortunately I was unable to find out any information about the next piece of art. An Outdoor showers with hundreds of tiles – including many with carefully drawing images depicting elements of life in the area – from sport, to thinks you find in Ballycastle.

This includes a mermaid. I wonder is this related to the Mermaid Cave which is located under Dunluce Castle

However since my visit to Ballycastle in the sprong of 2018, there has been a new mosaic installation erected: https://www.causewaycoastandglens.gov.uk/news/new-peace-iv-funded-seafront-mosaic-unveiled-in-ballycastle

And let’s not forget that Ballycastle has a harbour. The port of Ballycastle has been used since at least the 1400’s when it was known as Port Brittas. Then it became the main port for coal boats when coal was mined at Fairhead.  The newest Ballycastle Marina was opened on Monday in 1999. Each of the 74 berths have fresh running water and an electrical supply within easy reach with ample lighting and a keypad access point to stop unwanted guests intruding your privacy.

A small ferry which on occasion transports cars, people or even sheep from Ballycastle to Church Bay, Rathlin Island on a daily basis. The second service is a larger vessel capable of transporting fifty cars and passengers to and from Campbeltown which is a small town on the east side of the Mull of Kintyre in Scotland which like Rathlin Island can be seen from Ballycastle.

And where is the castle of Ballycastle? Ballycastle is named for its castle, but the question is, which castle? There is Dun-a-Mallaght, the fort of the curse which sits high above the old harbour, Dunrainey, the Fort of the Queen which is a tee on the golf course, Dunaneany, the Fort of the Fair, which was Sorley Boy McDonnell’s home and one in the diamond with a date stone of 1625 and who knows, there might have been older cashels than these when Ballycastle was the main harbour of the Kingdom of Dal Riata. 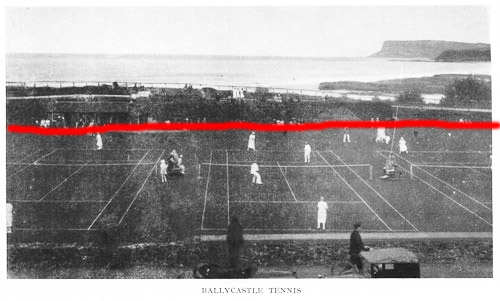 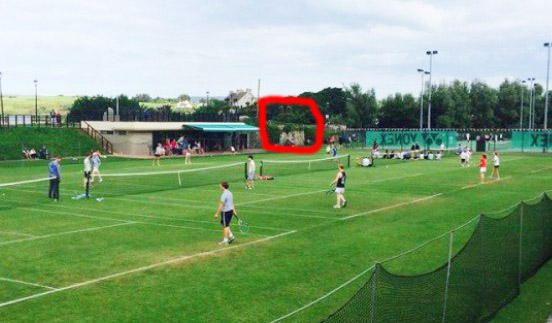 Ballycastle was a Viking settlement and their harbour was right beside the road: a wall remains enclosing the courts of Ballycastle Tennis Club. The first photo above is a modification of one on Eddie’s Book Extractsn I have marked the Viking Harbour walls with red.

Above the harbour, there is a memorial to Guglielmo Marconi. In 1898, Marconi made the first radio transmission in the world from Ballycastle to the East Lighthouse on Rathlin Island. 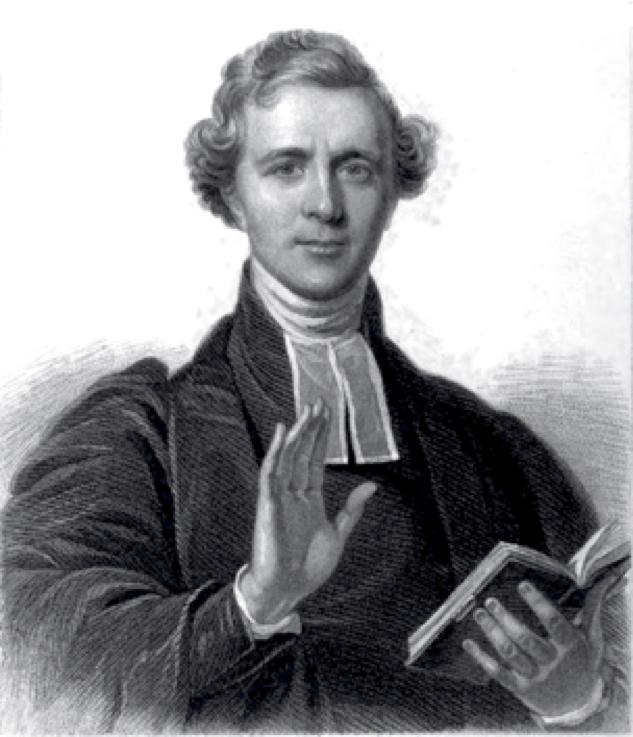 Hugh Boyd M‘Neile was a famous anti-Catholic preacher born in Ballycastle 7 July 1795, just three years before the Irish Rebellion of 1798; and, in 1798, M‘Neile was taken by his mother from Ballycastle to relatives in Scotland to escape the dangers and atrocities of 1798. His family were wealthy, and between 1815 and 1819 most of his time was spent with his uncle in Bath. With his Uncle he travelled extensively on the continent, spending time mixing with influential people, such as Madame de Staël and Lord Byron. In the middle of 1816, M’Neile fell very seriously ill in Switzerland. His life was saved by the medical intervention of Henry Brougham (1778–1868), a stranger to M’Neile, who had called at the inn. Henry Brougham went on to greater things.

Upon his return to England, a changed M’Neile became religious. He finally announced that he was embracing church ministry as a profession, his greatly disappointed uncle “disinherited” him. He wasn’t afraid to take strong positions. On 28 February 1847, while honorary canon of Chester Cathedral, he preached that the Irish Famine was an act of God’s retribution, punishing the Irish for their collective sins and their tolerance of Roman Catholicism.

The low-profile straits – The Sea of Moyle

There are some wonderful Ireland-focused blogs. Perhaps we need an official directory of high-standard personal blogs